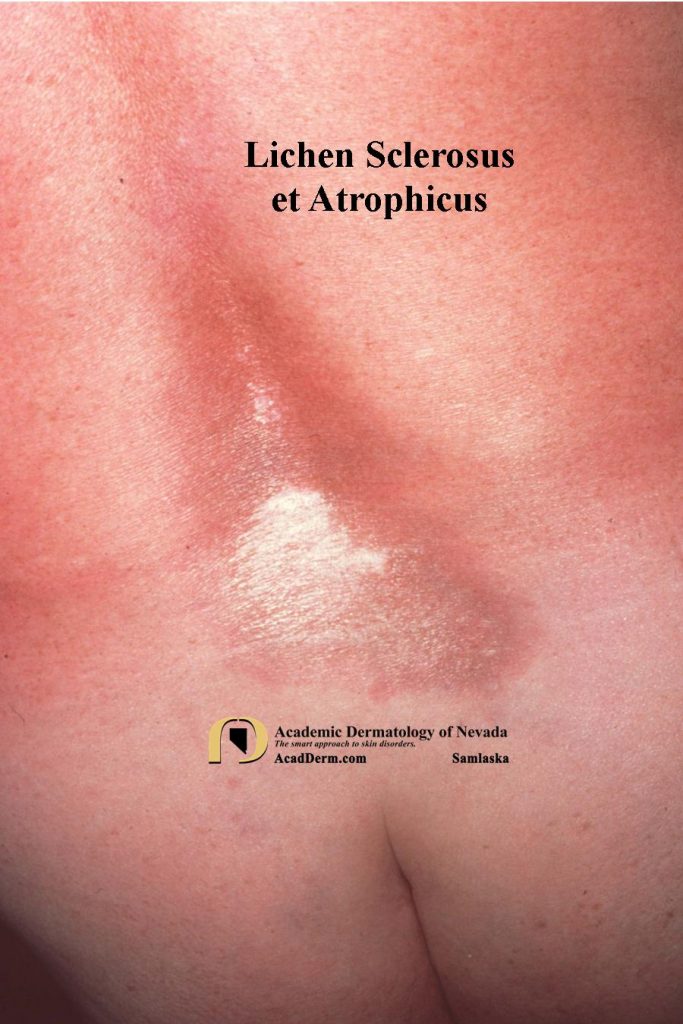 Lichen Sclerosis (LS), also known as Lichen Sclerosis et Atrophicus, is a common chronic skin disorder that most often affects the genital and perianal areas.  Genital involvement is referred to as Kraurosis Vulvae in women and Balanitis Xerotica Obliterans in men.  LS can present present in childhood to old age.  Although it occurs in all races, whites and Hispanics are more frequently affected, and it is rare in African Americans.  Both genders develop LS before and after puberty, however, females out number males at all ages.  The prevalence is around 1.7% of the population. Lesions may be found in nearly any location.  Initially lesions are white, polygonal, flat-topped papules, plaques or atrophic patches.  The lesions may be surrounded by a zone of erythema and are frequently described as “porcelain white” in color.  With hand involvement there can be pitting of the nails, longitudinal ridging and nailfold inflammation.  The lesions often produce atrophic scars.

ETIOLOGY:  The cause remains unknown, although there have been associations with autoimmune diseases such as thyroid disease, vitiligo, morphea, alopecia areata, and pernicious anemia in 20% to 33% of affected women.  Psoriasis has been reported in 7.5-17% of patients.  Autoantibodies to extracellular matrix protein 1 (ECM-1) are found in up to 80% of LS patients compared to 4% of controls and 7-10% of patients with other autoimmune diseases.  In women there is a bimodal distribution, prepubertal and postmenopausal.  Rare familial cases have been reported.  Association with cutaneous squamous cell carcinomas have been reported in long-standing disease.

TREATMENTS:  Treatments are frequently variable.  Topical high potency steroids or topical calcineurin inhibitors are most frequently used and often result in significant improvement in anogenital LS.  Narrow band UVB and PUVA can be effective alternatives in generalized cases, but it must be determined that it is not the actinic form.  There are anecdotal reports of responses to oral retinoids (acitretin), cyclosporin A, and methotrexate.  To read more about LS click HERE and HERE.