Academic Dermatology of Nevada has been serving the Henderson and Las Vegas community since 1998.

We offer patients of all ages full service advanced skin care for medical, cosmetic, and aesthetic dermatology. All services are delivered by licensed and certified professionals who are experts in applying the latest treatment technologies available today. We strive to deliver the highest quality of services to meet your individual needs. 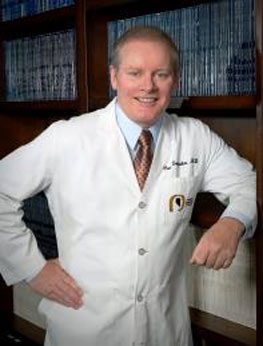 He completed his Dermatology training at Walter Reed Army Medical Center in Washington, D.C., where he published over 20 articles as a Resident in Dermatology and received extensive training in Mohs surgery. Cosmetic Dermatology was performed regularly to include the use of carbon dioxide lasers, vein sclerosing, collagen injections and the use of a variety of peels, including full face phenol peels. While at Walter Reed Army Medical Center Dr. Samlaska had extensive training in exotic disorders such as leishmaniasis, Loa Loa, myiasis, HIV disease, among many other areas that he has published on to include genetic disorders such as Proteus Syndrome and subcutaneous emphysema. He is board certified in Dermatology and is a Fellow of the American Academy of Dermatology.

After completing his Dermatology training Dr. Samlaska returned to Tripler Army Medical center as Chief of Service where he continued his academic pursuits, training Internal Medicine, Family Practice, and Pediatric Residents as well as Medical Students at Tripler and the University of Hawaii School of Medicine in Dermatology. Dr. Samlaska was on staff at the University of Hawaii. He continued to teach Internal Medicine, attending on the medical wards and attending morning report throughout his time at Tripler Army Medical Center. During this time he became involved with providing telemedicine support for the Department of Defense staff stationed on remote islands in the Pacific (These islands were used to monitor the shuttle, satellites, and potential ICBMs). Telemedicine is a rapidly developing application of clinical medicine where medical information is transferred through interactive audiovisual media for the purpose of consulting, and sometimes remote medical procedures or examinations. He was instrumental in establishing these earliest forms of telemedicine throughout the military.

Dr. Samlaska returned to Walter Reed Army Medical center in Washington, D.C. to teach Dermatology. He was tasked to establish telemedicine support for troops in Bosnia as part of Operation Joint Endeavor. During his military career he was awarded the Army Achievement medal for implementing and streamlining the Occurrence Screening Program with computer software, which was so successful the program was adapted for use by the entire Medical Center. He was awarded the Army Commendation Medal for his efforts in publishing a Military Dermatology textbook, designed to be used in the field. The Meritorious Service Medal was awarded for his efforts as Chief of Service in Dermatology, scholarly activities and excellence in teaching at Tripler Army Medical Center.

His military career ended after 14 years of Academic Medicine and he moved to Las Vegas where he established Academic Dermatology of Nevada. He continues to be actively involved with academics and is an Associate Professor of Medicine at the University of Nevada School of Medicine. He teaches at conferences, gives lectures at hospitals (Sunrise Hospital, St. Rose Hospital, University Hospital), associations (Nevada Osteopathic Medical Association Annual Conventions), and surgical conventions (American Society of Mohs Surgery). Dr. Samlaska participates in various studies to include the Parke-Davis protocol CI376-418 analyzing the effects of estrogens on aging skin and the ESPRIT study by Abbott, a psoriasis registry monitoring Humira treatments. For more detailed information click on the link to see a copy of his curriculum vitae above, under the About Tab or click HERE.  To check out Dr. Samlaska’s Blog click HERE. 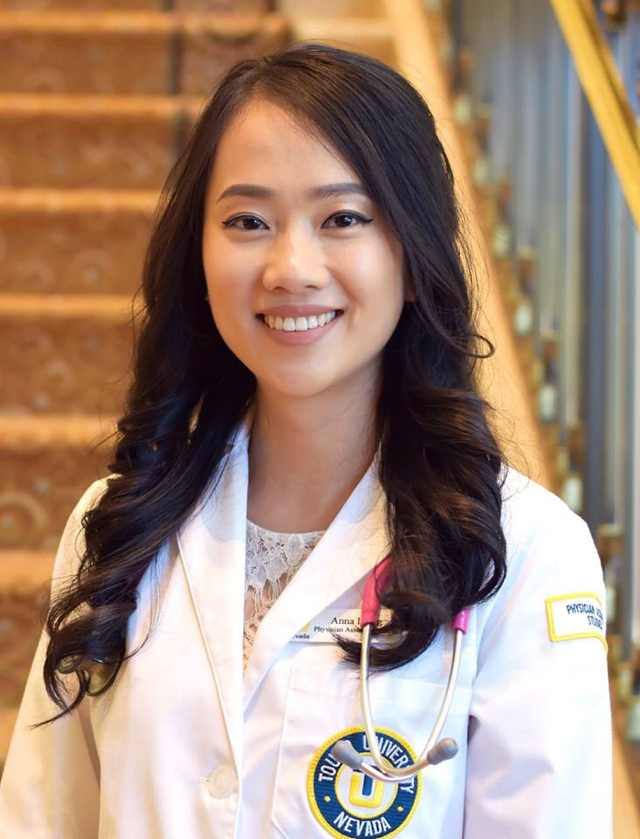 About our Physician Assistant

Anna Liang has been part of the Academic Dermatology of Nevada team since 2019.  She earned her Master of Physician Assistant Studies in 2019 from Touro University in Henderson, Nevada.  Anna received her Bachelor of Science in Biochemistry and Molecular Biology from the University of Nevada (Reno) with honors.  During her undergraduate studies she volunteered in a medical mission trip to Honduras and was a leader in many other student organizations.  Prior to starting Physician Assistant school she worked as a Physical Therapy technician, assisting patients in their recovery and fitness.  In her spare time Anna enjoys traveling and spending time with family.  Having lived in China for several years, Anna is fluent in both Mandarin and Cantonese Chinese.

Anna has been trained exclusively by Dr. Samlaska in all treatments of skin, hair and nails.  She diagnosis and treats patients with acne, eczema, psoriasis, alopecia, warts, skin cancers, melasma and much more.  She is experienced in treating difficult acne patients with Accutane.  Anna performs many cosmetic procedures to include Botox and fillers.  She is a member of the American Academy of Physician Assistants and the Nevada Academy of Physician Assistants. 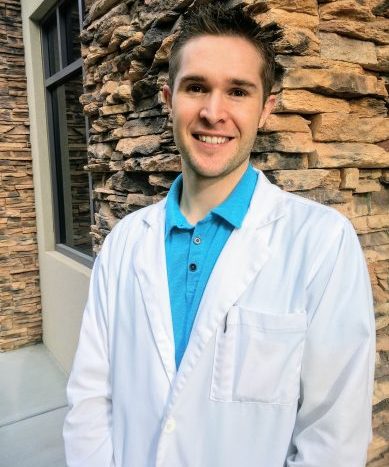 About our Physician Assistant

Andrew began working at Academic Dermatology of Nevada in 2016. He graduated in 2015 from Touro University – Nevada in Henderson, Nevada with a Master of Physician Assistant Studies. During PA school he was involved in student government and work-study activities. Andrew received his Bachelor of Science in Health Science from Boise State University. He also received his Associates of Science in Biology from College of Southern Idaho. During his undergraduate studies, Andrew worked as an anesthesia technician assisting with anesthesia for surgical procedures.

Andrew has been trained exclusively under Dr. Samlaska in all treatments of skin, hair and nails. He regularly treats difficult cases of acne with a variety of methods including Accutane. He can also diagnose and treat patients with eczema, psoriasis, alopecia, warts, skin cancer, and much more. He performs full body skin checks and skin cancer screenings. He is a member of the American Academy of Physician Assistants and Nevada Academy of Physician Assistants. In his free time, Andrew enjoys outdoor activities, traveling, and movies. 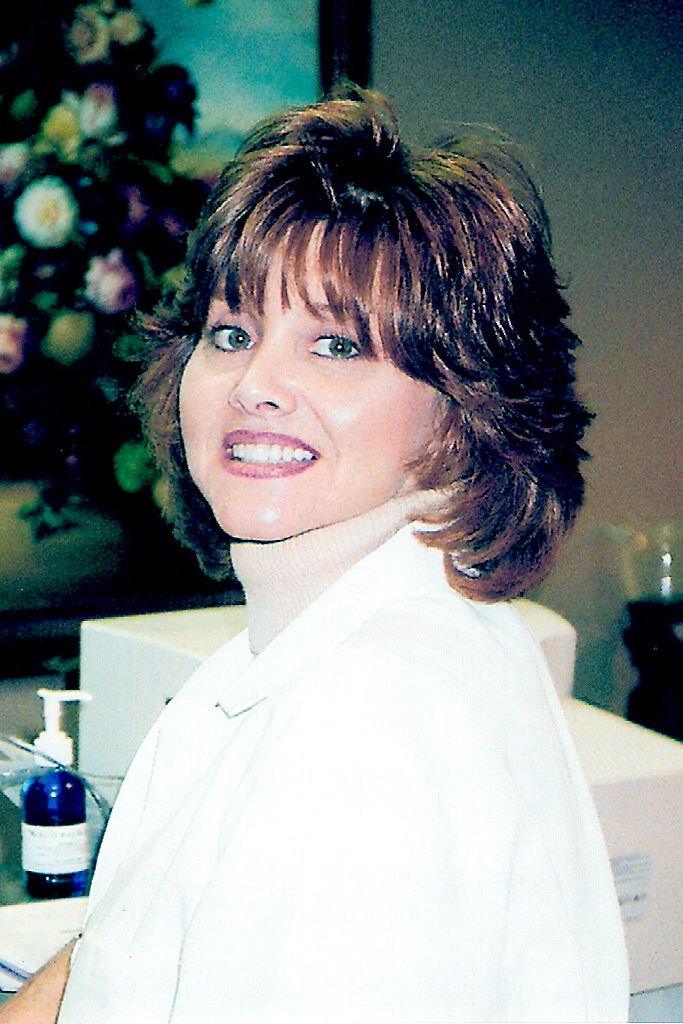 About our Aesthetics Director

Judi Hynds, CPCT was trained by the inventor of the FotoFacial, Dr. Patrick Bitter Jr. – Judi has performed over 3500 FotoFacials. She also has extensive experience in Thermage, having performed over 1500 Thermage sessions. She has won the prestigious Pinnacle Award for three consecutive years for the State of Nevada. Judi has worked with physicians in providing the best of aesthetic care for 13 years. 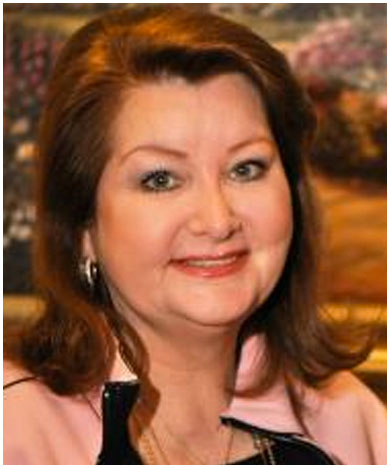 About our Paramedical Esthetician

Brenda Huff has over 30 years of experience in the skin care field. She has worked and trained in the United States and abroad expanding her knowledge on a variety of cosmetic techniques. Well known in the medical community, Brenda provides the best of care to her clients, many of whom are wives of physicians practicing in the Las Vegas area.

We accept most insurance for the evaluation and treatment of medical conditions. Financing is available for some of the more advanced cosmetic procedures. We accept Visa, Mastercard and Discover.