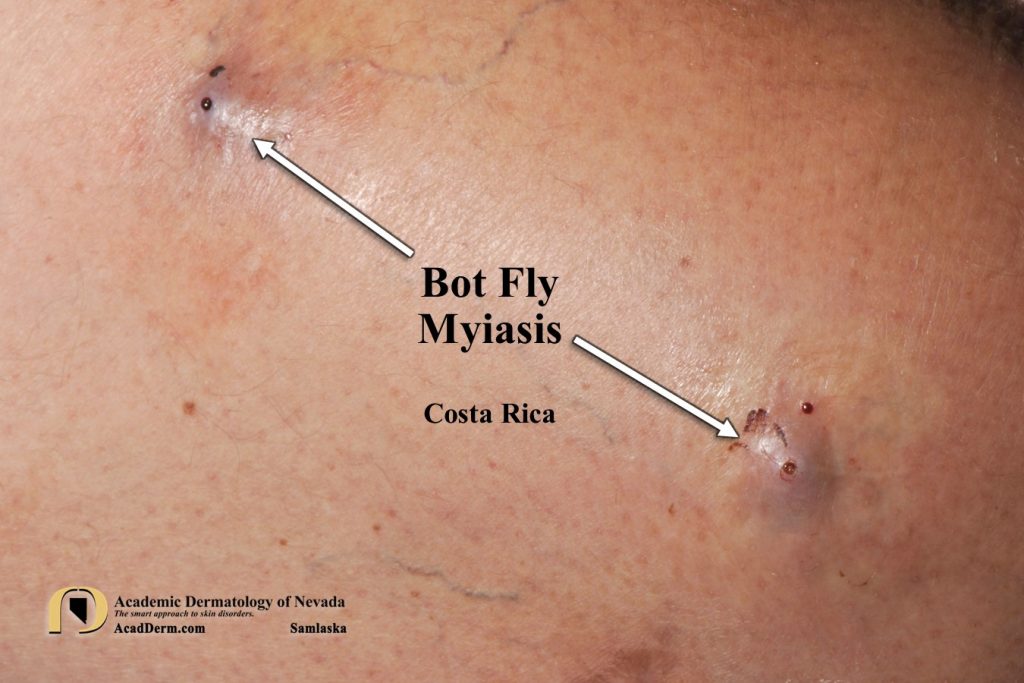 Case of the Month:  A 70 year gentleman spends his time between Las Vegas and Costa Rica, where he has a home.  He was at his house in Costa Rica one day when he decided to walk into the surrounding wooded area near his home.  He notes that he experienced a number of insect bites during this exploration.  He returned to Las Vegas and over the next few weeks he noted a number of the bites became swollen and tender, exuding blood and serous fluid along his right arm and left lower leg.  He saw his primary care physician who believed these to be secondary infections related to the arthropod bites and he was treated with antibiotics.  The lesions did not improve.  He was referred to an infectious disease doctor and his antibiotics were changed, again with no significant improvement. PHYSICAL EXAMINATION:  There were multiple erythematous, oozing plaques with a central punctum.  The areas were somewhat nodular and indurated.  There was no obvious larva noted, even after use of petrolatum placed over the openings of nine sites.   Myiasis was believed to be the most obvious cause.

TREATMENT:  Myiasis can sometimes be aided by use of topical petrolatum applied to the sites.  There are numerous different species that can cause myiasis and the response to use of topical petroleum products such as vaseline or petrolatum, are variable.  I have reported a case of Tumbu myiasis in the Archives of Dermatology which responded well to topical petroleum products, to review this blog click HERE.  In this particular patient, reported here, this did not work.  Using local anesthesia I used a 3.0 mm punch biopsy to remove the overlying tissue at each of nine punctums, one at a time.  With a tissue forceps I extracted each larva…sometimes whole, other times in pieces.  The patient tolerated the procedures well and the sites were finally allowed to heal after extraction of the larva. LIFE CYCLE OF BOT FLY:  The adult female Dermatobia hominis deposits their mature eggs on a blood-feeding arthropod, usually a mosquito or a tick, that is captured by the bot fly in flight.  This behavior has been referred to as phoresy.  As the vector takes a blood meal, the bot fly eggs react to the change in temperature and hatch.  The larva enter the skin through the bite wound or hair follicles where it burrows into the skin.  The larva breathe through two posterior spiracles which lie flush with the skin of the host.  After 7 days of infestation the larva molt into the second stage instar, then into third stage instar after 18 days.  After approximately 30 days, the third stage instar larva crawl out of the host to pupate in the soil.