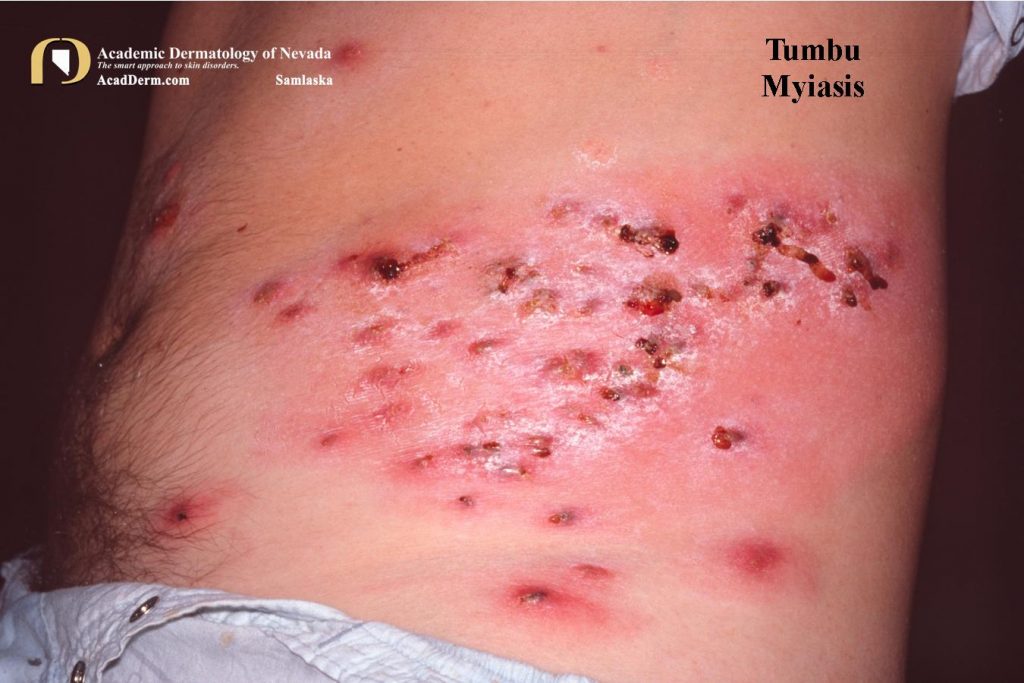 The Walter Reed Files…  I was asked one weekend to come in to see a patient at Walter Reed.  He was a 29 year-old caucasian male who developed a purulent eruption along his left flank.  His was on assignment in West Africa in Abidjan, Ivory Coast.  He spent the first afternoon lunging at the poolside of this “four-star” hotel near a sandy and dirt-strewn area with numerous wooden cots for sunbathing.  The patient spent the afternoon lying on these cots and did not recall any bites or skin irritation at the time.  The following morning he had a papular pruritic “rash” on his abdomen and left flank.  During the next 3-4 days the rash became intesively pruritic and tender to touch.  The patient traveled to Zaire and Senegal before returning to the United States 8 days later.  He presented to a local physician because numerous lesions had developed into abscess-like furuncles.  He was diagnosed as having herpes zoster and was treated with topical medications.  While bathing that evening he noticed air bubbles emerging from his abdominal abscesses and approximately 20 larva appeared.  Naturally, the patient was very distraught and presented to a local hospital with the specimens in hand where he reported to the emergency department that he had “worms crawling out of his skin.”  The ER staff thought his story was fabricated and he was sent to Walter Reed Army Medical center for further evaluation. 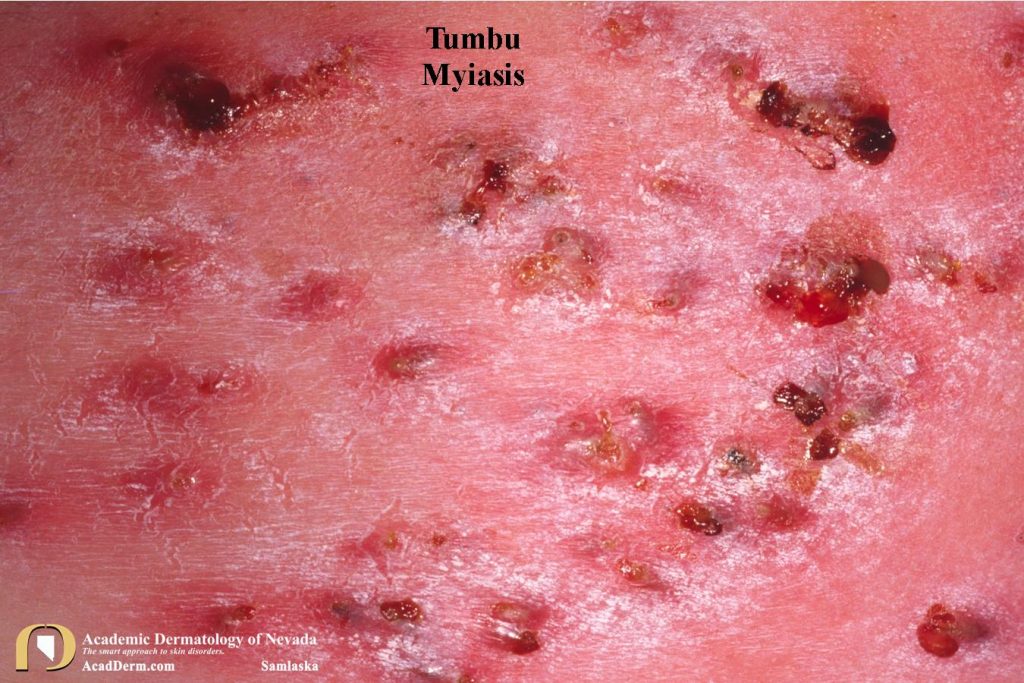 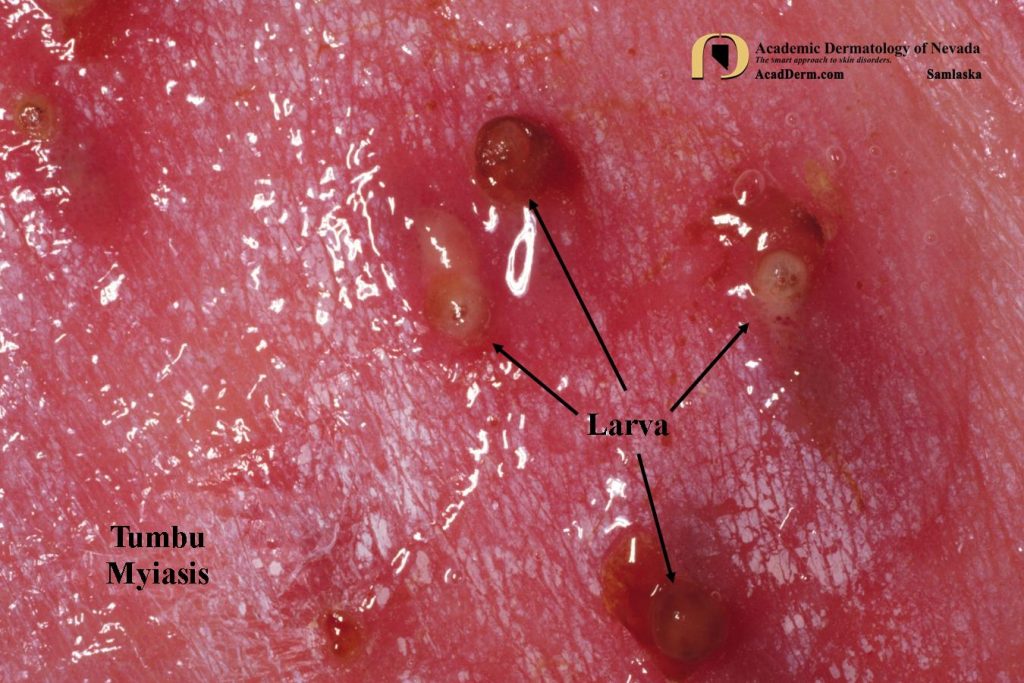 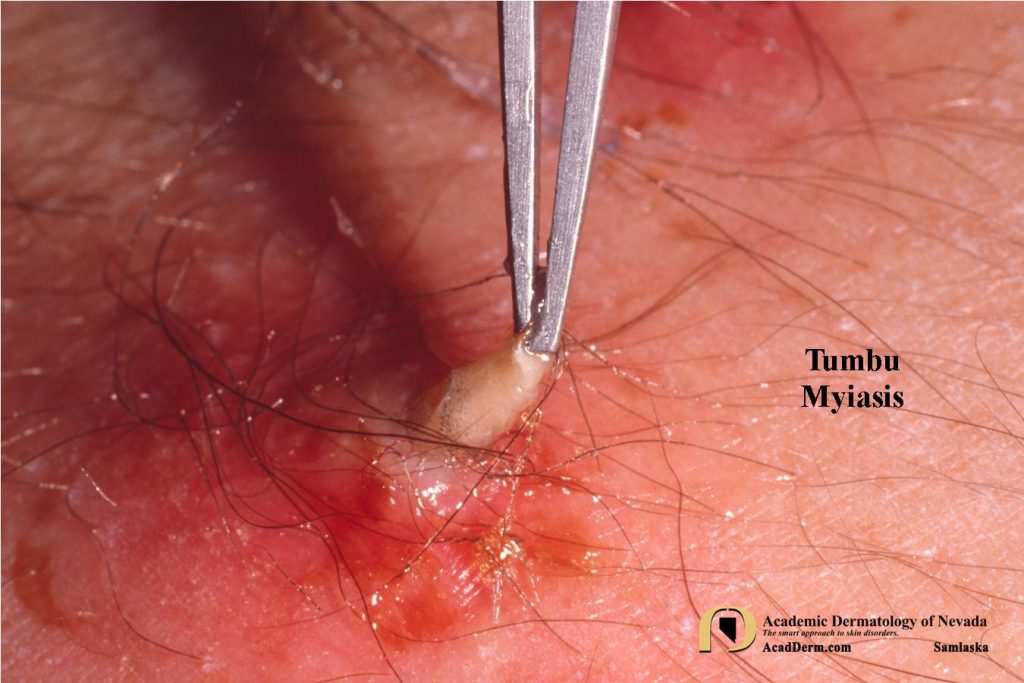 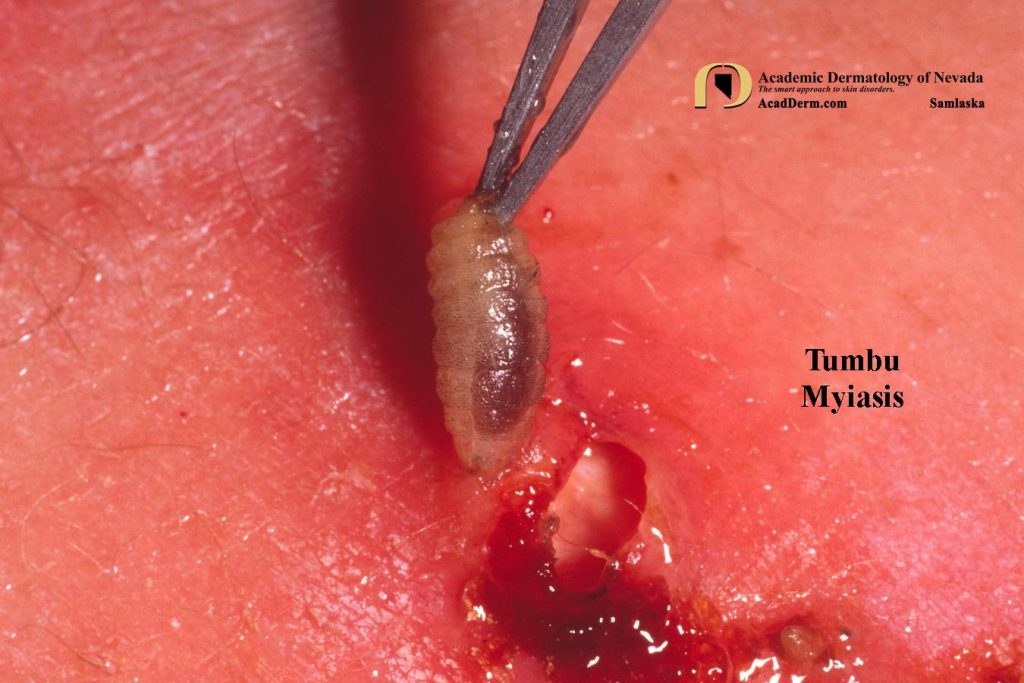 On physical examination there were 53 furuncles located principally on the abdomen and left flank, with solitary lesions on the back, wrist, knee, and buttock.  The surrounding skin was erythematous, edematous and tender to the touch.  A thin layer of petroleum jelly was placed over the sites.  Within a few minutes, numerous larva were observed migrating to the surface where they were easily removed with a tissue forceps.  A total of 64 larva were recovered from the 53 furuncles, indicating that some lesions contained more than one fly larva per site.

This is Cutaneous Myiasis caused by Cordylobia anthroprophaga, the African Tumbu Fly.  The likely source was the wooden cot the patient was lying on.  To review the life cycle please take a look at the video above that my daughter and I produced.  We published this in the Archives of Dermatology, 1990;126:199-202.  To read more about Tumbu Myiasis click HERE and HERE.