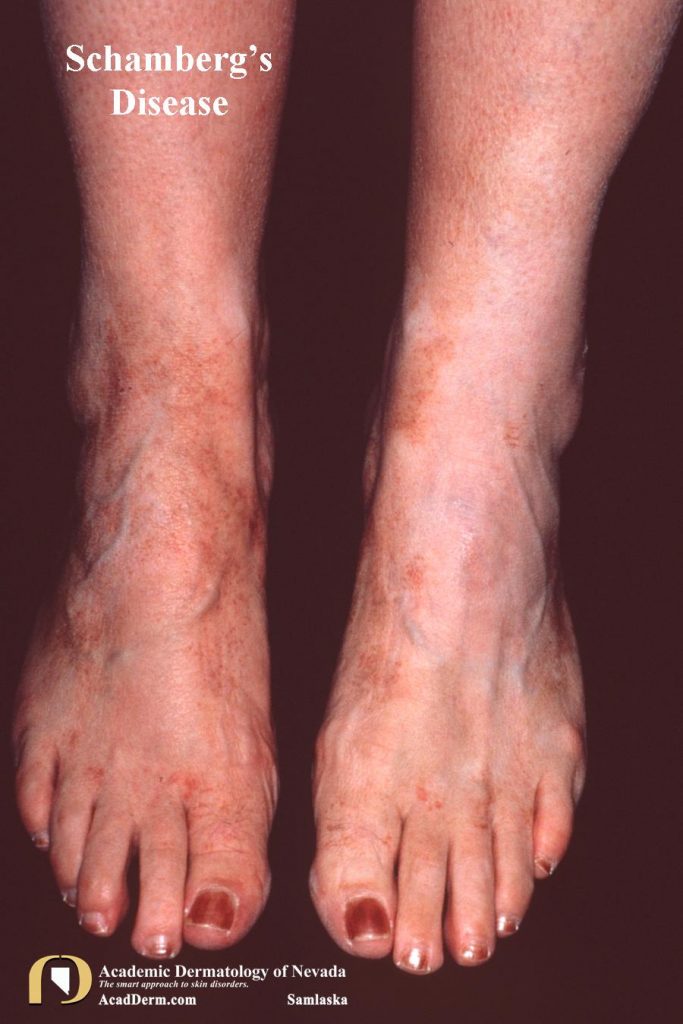 Jay Frank Schamberg first described the disease in a 15-year-old boy in 1901.  It is a chronic condition that can afflict anyone at any age, but may be seen more in men than women, in one study the ratio was 3.8:1.  Patient’s develop typical lesions, most commonly on the lower legs although the arms and trunk at times may be involved. 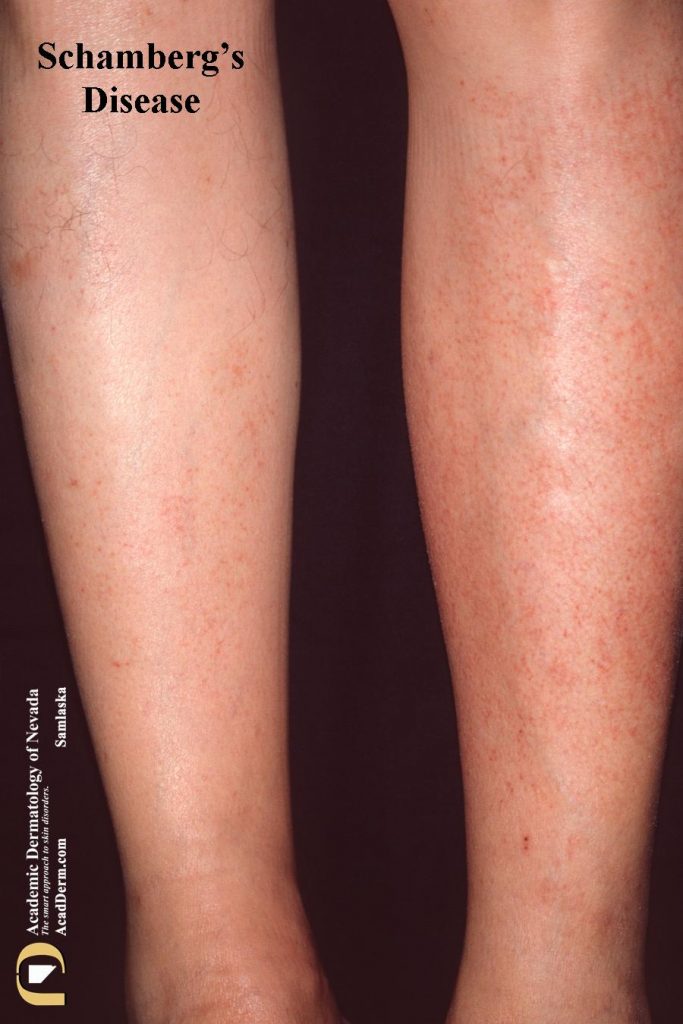 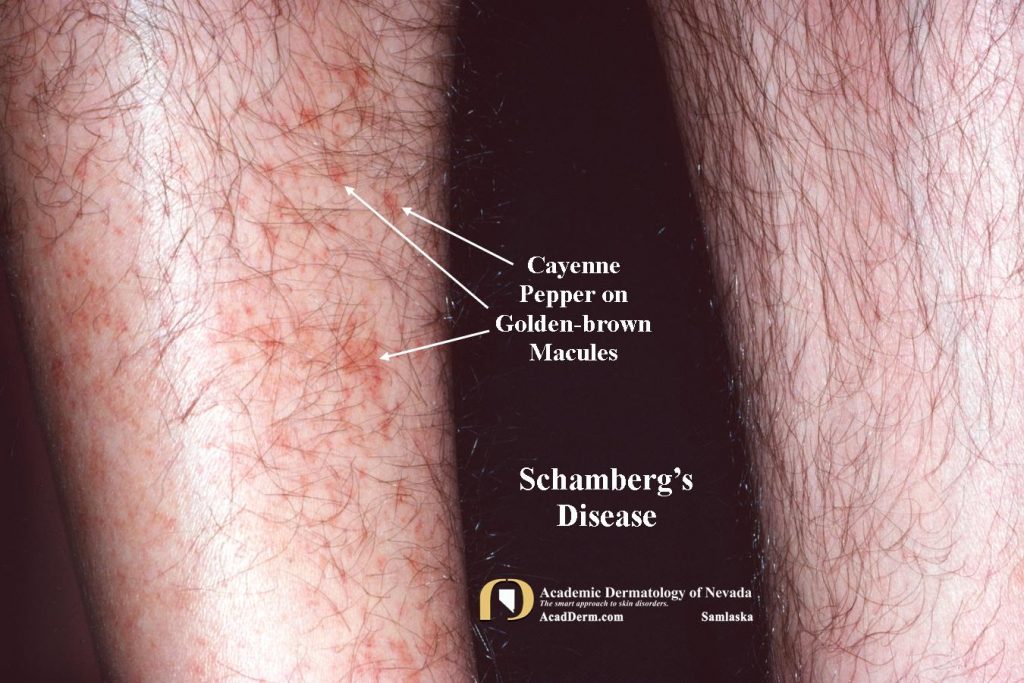 The typical lesions often progress to thumbprint sized patches and are composed of aggregates of pinhead-sized petechiae that resemble grains of cayenne pepper on a background of golden-brown hemosiderin.  It is a capillaritis (inflammation of small capillaries) causing blood to extravasate into surrounding tissues.  The blood cells break down in the papillary dermis causing hemosiderin deposits–thus the golden-brown color.  It is often distressing to patients because it doesn’t look good…and many want to know what it is and in some it can cause psychological stress.  It is often asymptomatic but some may complain of pruritus (itching). 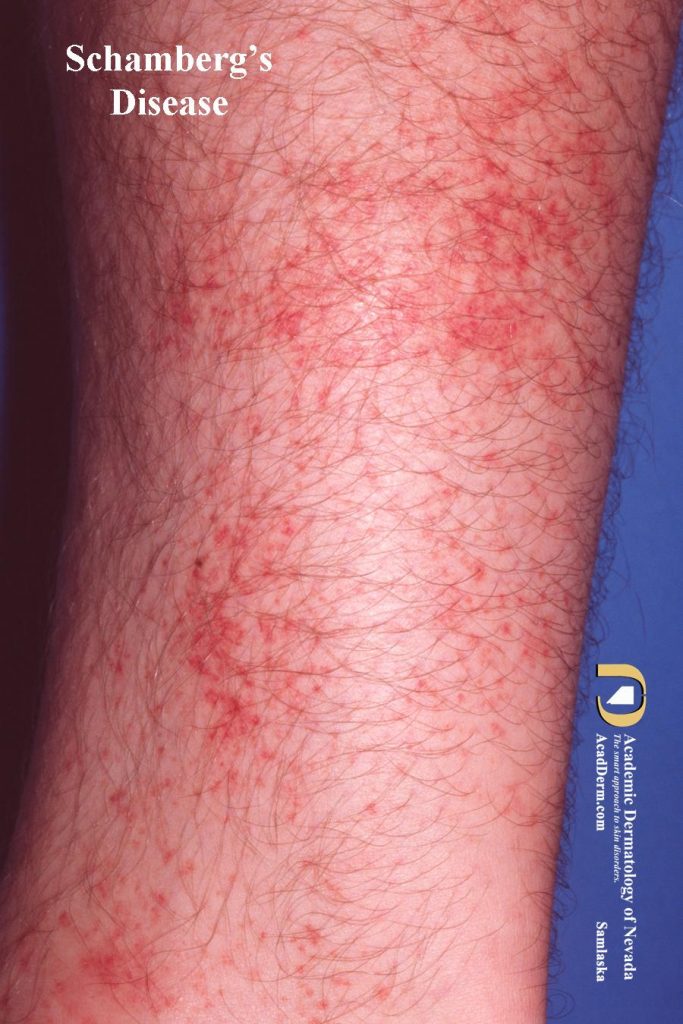 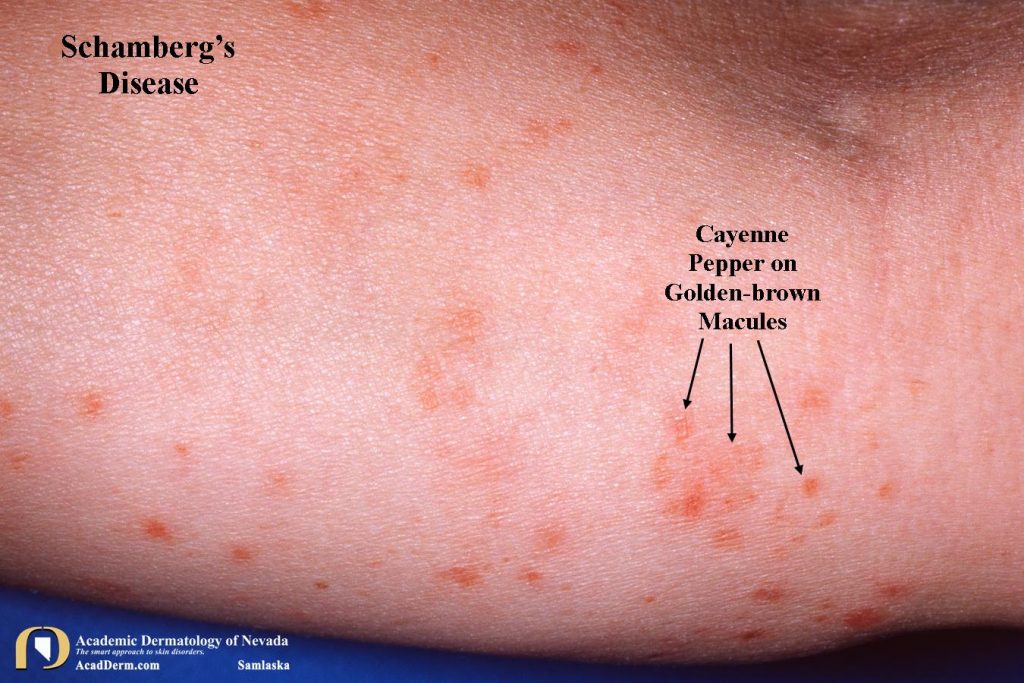 EPIDEMIOLOGY:  The cause of Schamberg’s disease remains unknown.  Studies suggest it may be related to a viral infection.  There have been reports of other family members coming down with the disease suggesting a possible genetic cause or genetic susceptibility.  Other causes have been suggested, such as hypersensitivity reaction, aberrant cell-mediated immunity, and possible association with medications such as aspirin, chlordiazepoxide, paracetamol, bezafibrate and amlodipine.

TREATMENT:  Supportive.  I usually treat with a lower class topical steroid (class IV) such as Triamcinolone cream 0.1%…it helps in many patients.  General skin care, such as avoiding hot water showers and baths, use of mild soaps, avoiding scrubbing the regions and frequent application of moisturizers should be followed.  As usual, my blogs are meant to educate and teach about various skin disorders, they are not meant to substitute for a clinical evaluation by a trained dermatologist.  Self diagnosis is not a good idea.  If you believe you have Schamberg’s disease I strongly suggest you see a dermatologist to confirm the diagnosis.  To read more about Schamberg’s Disease click HERE and HERE.  To read more about Capillaritis and the various disorders associated with it click HERE.