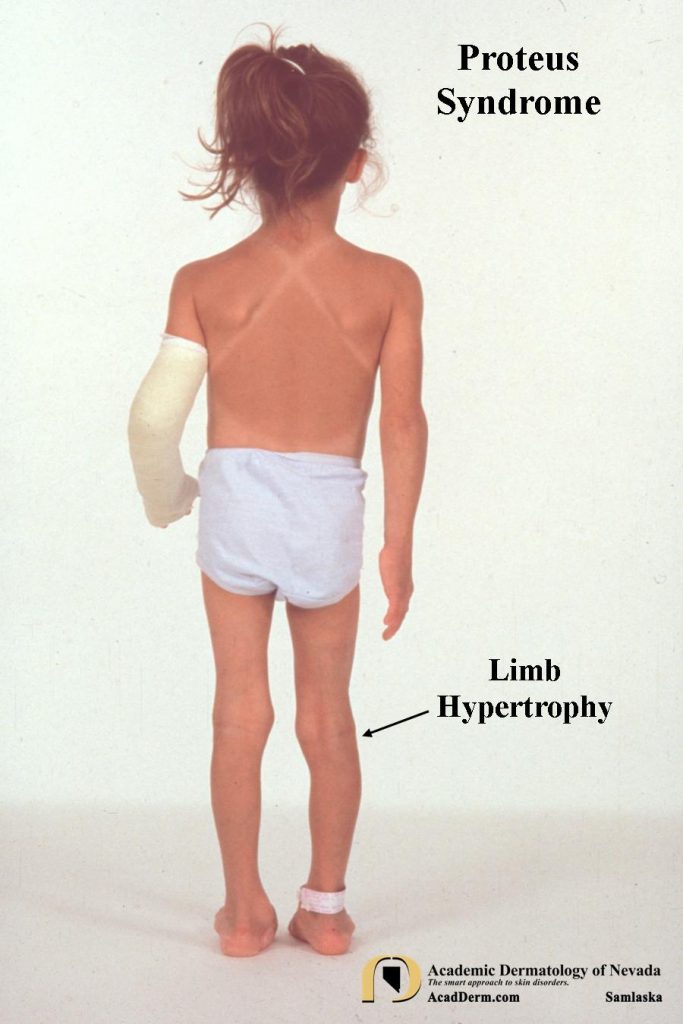 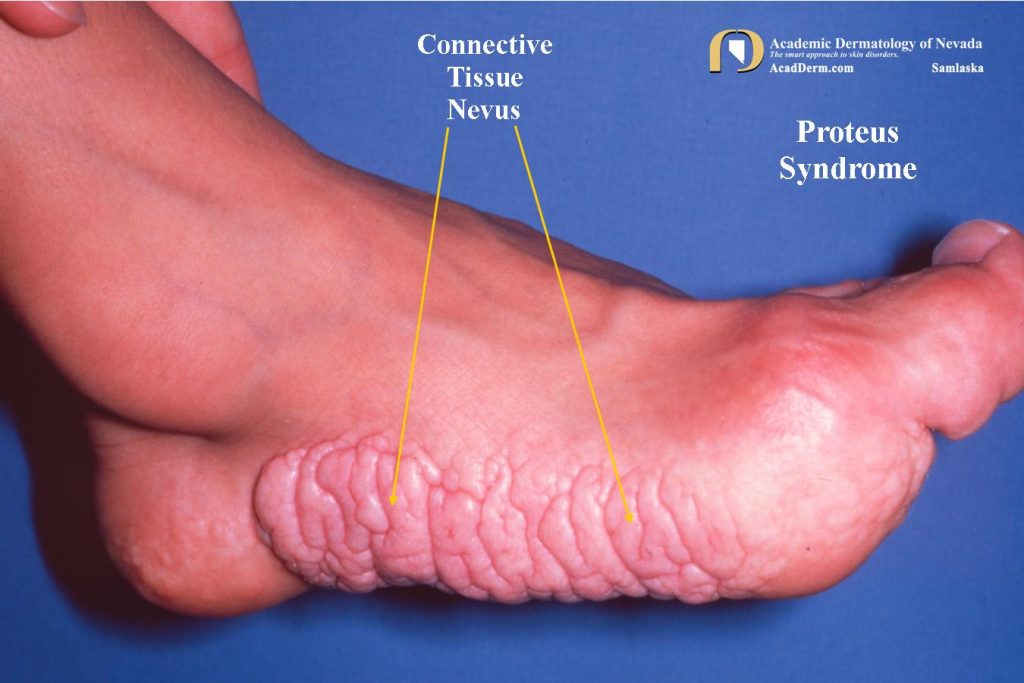 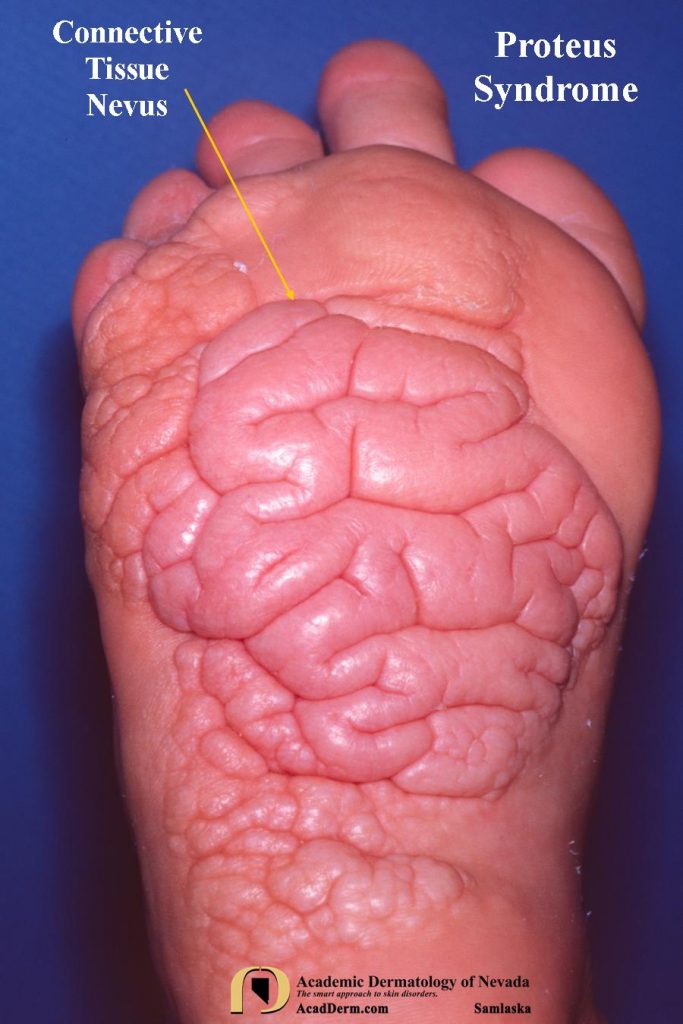 This is a patient we reported in the Archives of Dermatology (Samlaska CP, et al.  Proteus Syndrome.  Arch Dermatol  1989;125:1109-1114).  We now know that the cause is related to a mosaic gene mutation in AKT1, which was discovered in 2011.  Due to the mosaic distribution, the abnormal gene is present in only some cells that produce an abnormal protein that increases cell proliferation.  The syndrome has many protean manifestations to include: 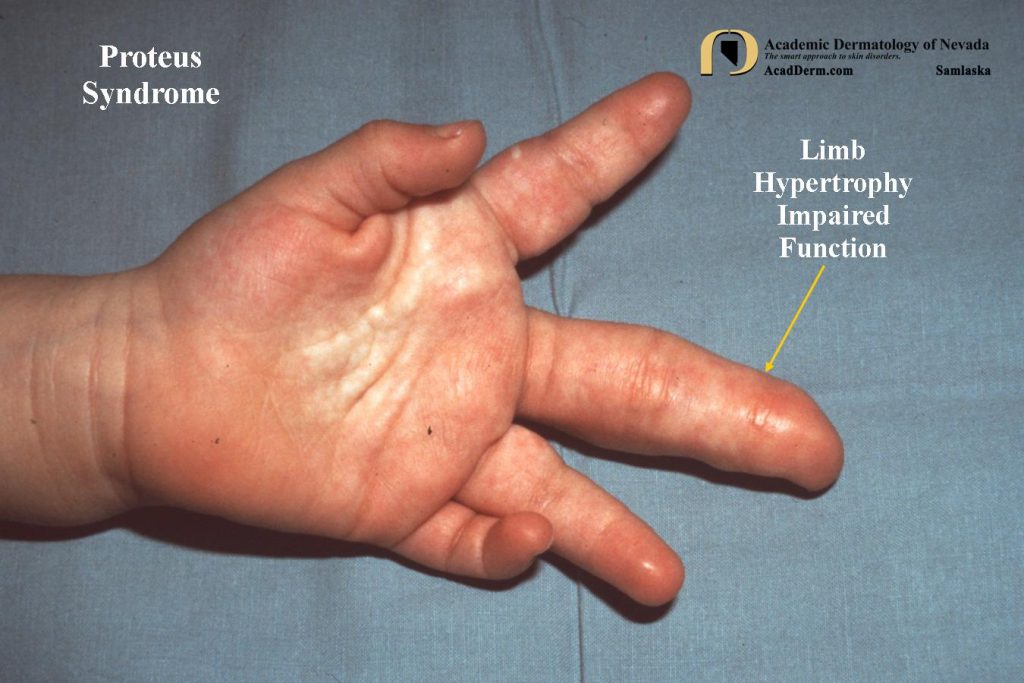 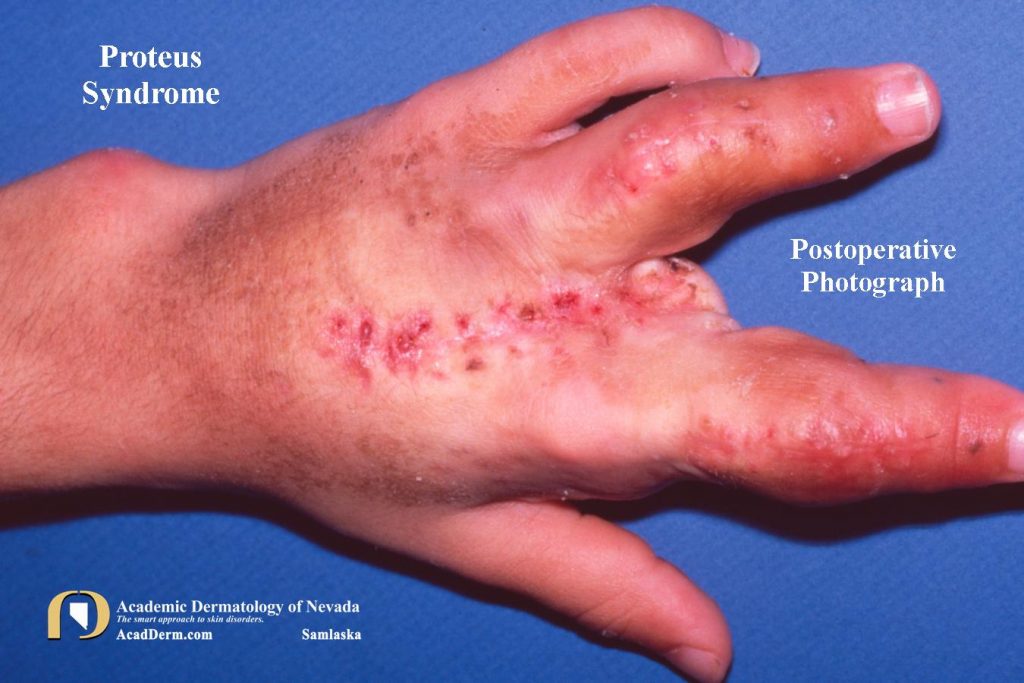 Our patient developed sclerotic changes to her fingers resulting in non-functioning digits.  In an attempt to improve function her left middle finger was removed and surgical treatment of her left second and fourth digits performed.  Needless to say this is a very debilitating congenital disease with numerous challenges just to be able to perform daily necessities.

Cerebriform connective tissue nevus is considered a category I finding for Proteus Syndrome and is considered almost pathognomonic.  They are most commonly found on the sole, hand, alae, ear, and lacrimal puncta.  I was working at the Internal Medicine clinic at the University of Nevada Hospital in Las Vegas some years ago when a patient presented with a problem involving his right 4th toe.  Since childhood he experienced hypertrophy of the toe to the point he would have to cut a slit on the top of his shoes to be able to use them.  It also often required him to purchase different sizes for each foot.  Here are pictures of his toe… 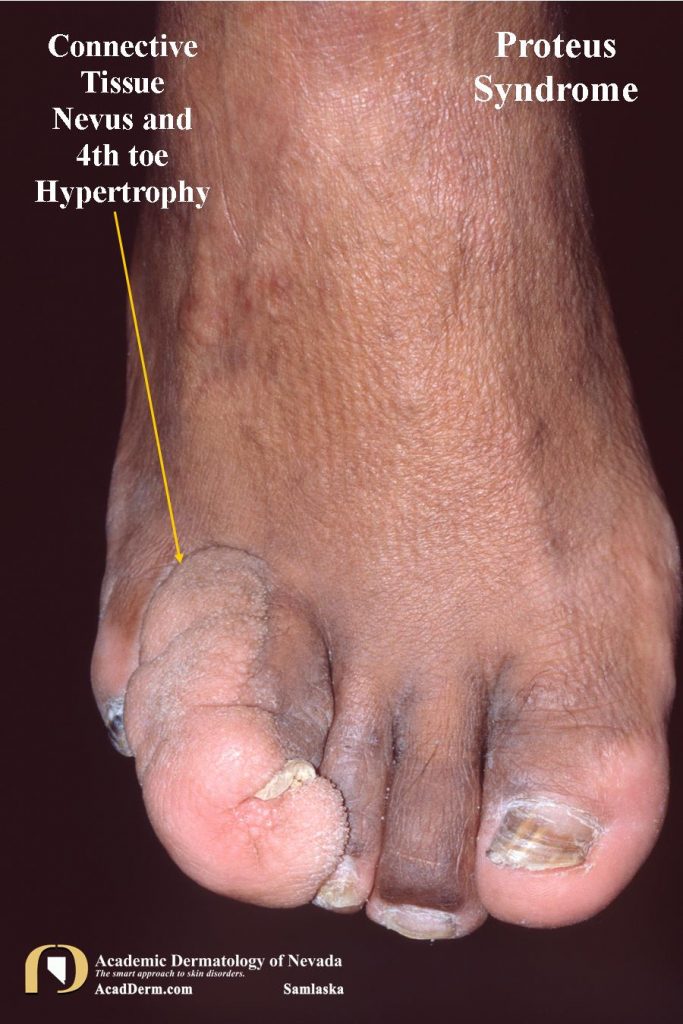 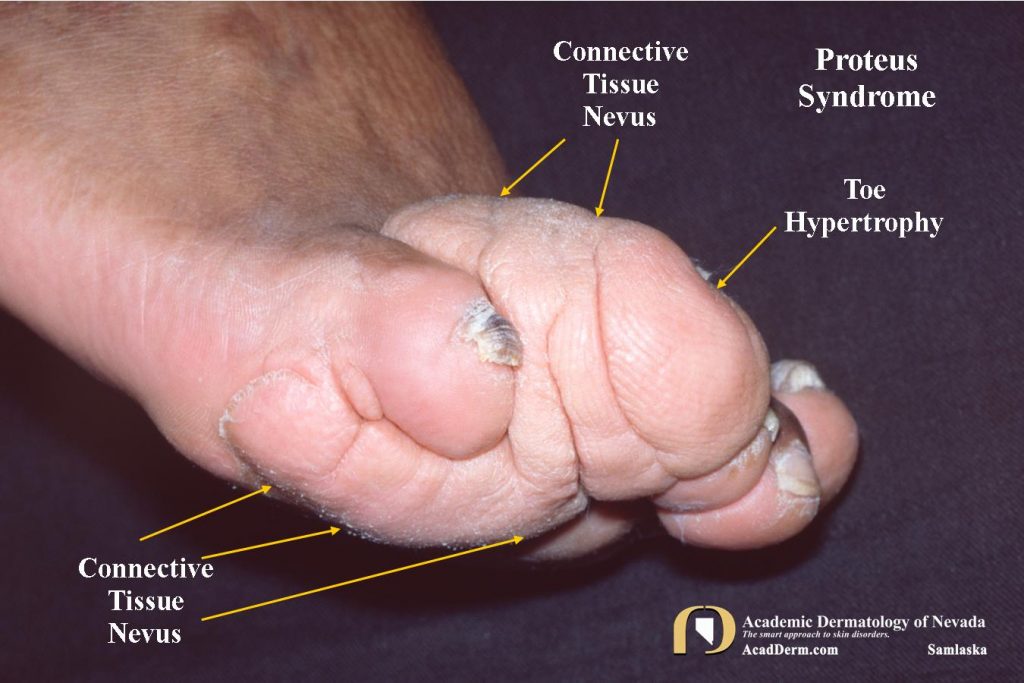 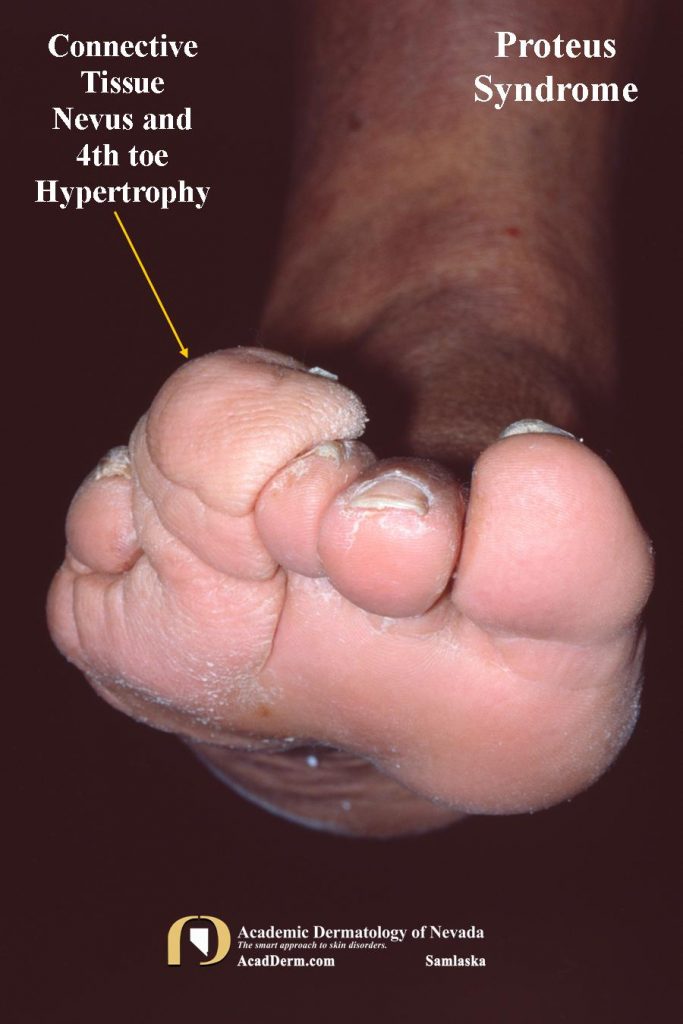 What you see is the hypertrophy of the right 4th toe and he also had tissue proliferation which on biopsy was confirmed to be a connective tissue nevus.  What he has is a very distal somatic, mosaic mutation that only affected his one toe.  The Proteus defects were restricted just to his right 4th toe regions. 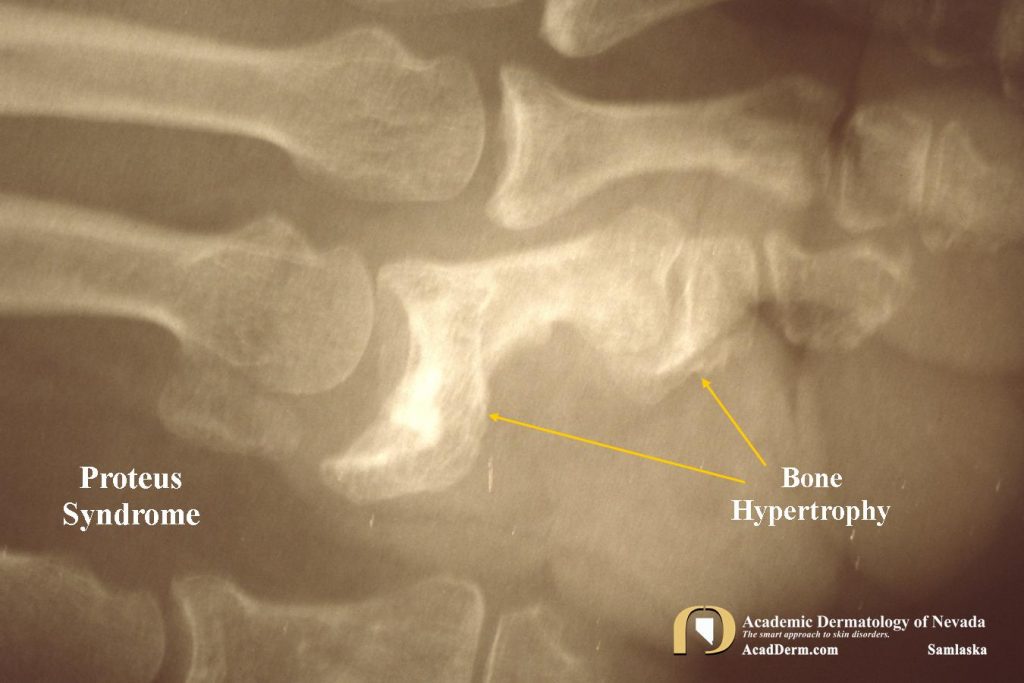 The radiography confirmed the hypertrophy and exostosis associated with the toe.  This was published in the Archives of Dermatology (Samlaska CP.  Hypertrophic toe in a 44 year-old man.  Arch Dermatol 2001;137:219).  To read more about Proteus Syndrome click HERE and HERE.  To read about Neurofibromatosis 1 click HERE.