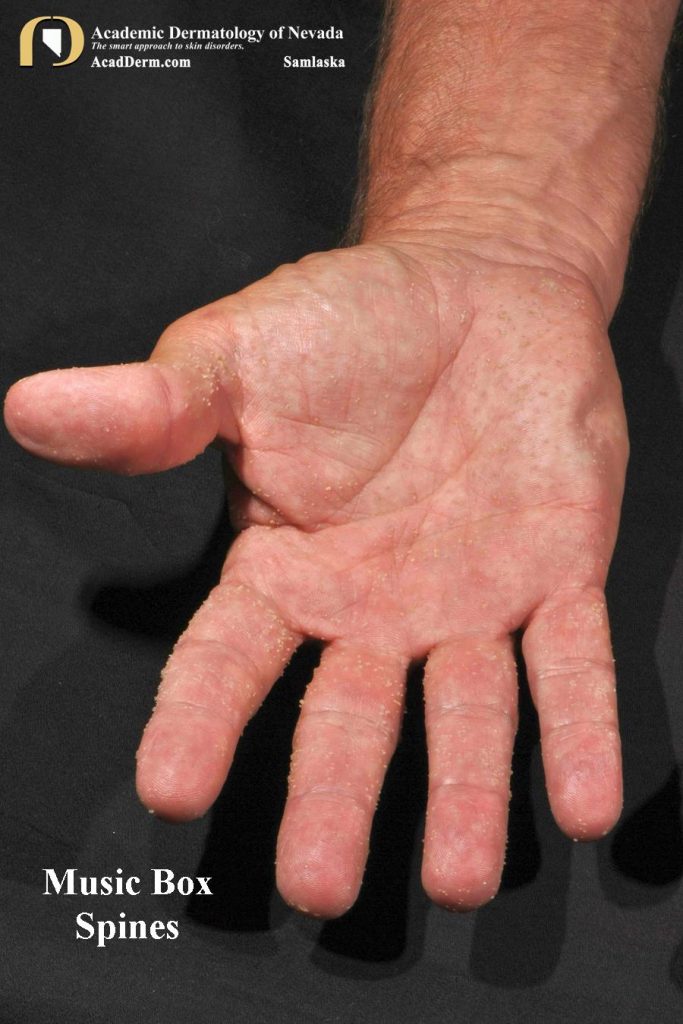 Brown reported the first case of Spiny Keratoderma in 1971 when he described punctate keratotic projections on the palms of a 20-year-old male.  Commonly referred to as “Music Box Spines Keratosis” it has also been referred to as punctate keratoses of the palms and soles, spiny keratoderma, punctate porokeratotic keratoderma, multiple minute palmar-plantar digitate hyperkeratosis, keratoderma punctata, keratosis puntata palmaris et plantaris, keratoma hereditary dissipatum palmare et plantare, kertoderma disseminatum palmaris et plantaris, palmar keratoses, palmar and plantar seed dermatoses and filiform hyperkeratosis.  Patients present with numerous, flesh-colored, well-marginated keratotic papules on the palms, fingers and soles.  Our patient presents with a history of this for many years, and he has one brother with the same condition and another brother that does not.  His father also had it. 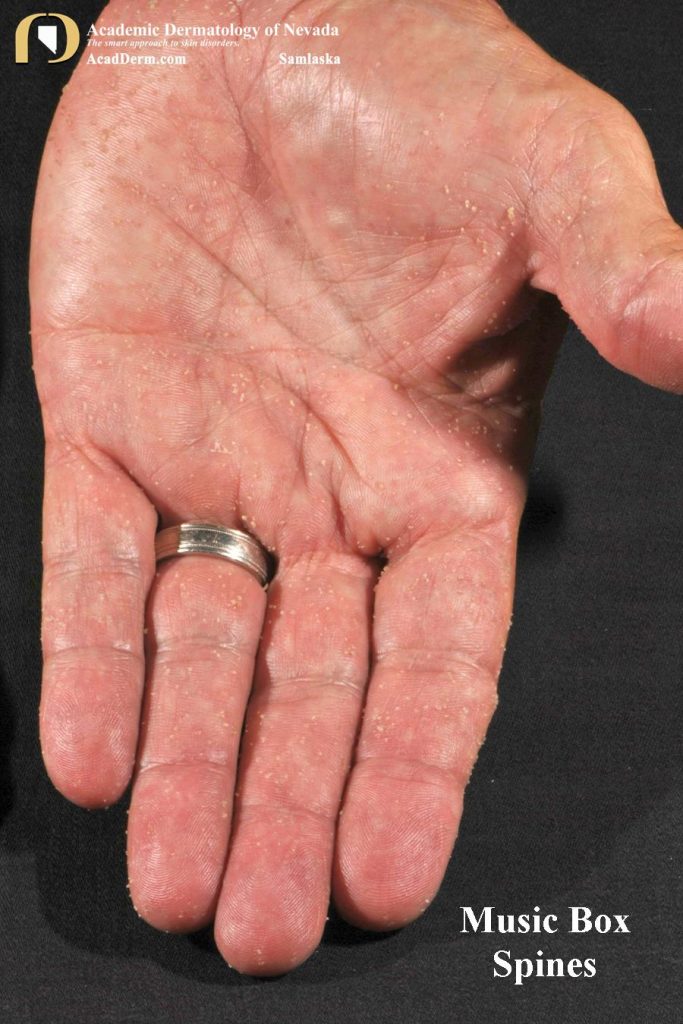 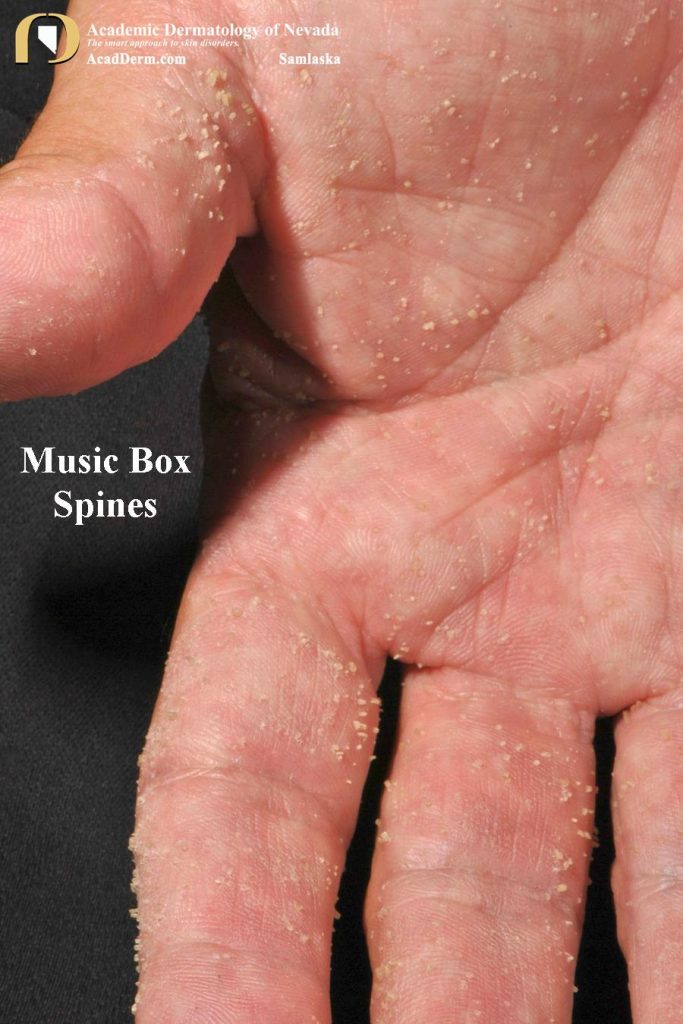 There may be 100s of spines, such as shown in these images.  The main symptom, other than the roughness of the primary lesions, is pruritus.  Onset is between the ages of 15-68 years.  Black individuals predominate and it more frequently affects men.  Our patient exhibits an autosomal dominant inheritance pattern and this is supported in the literature.  There are acquired forms of Spiny Keratoderma and most cases are males over the age of 50.  Some authors have suggested an association with malignancy, but this is poorly documented in the literature.  In a recent series of 2 patients, aged 84 and 67, neither were shown to have an underlying malignancy as the cause (click HERE).  In one series out of Europe, idiopathic spiny keratoderma was associated with underlying neoplasm in up to 50% of cases.  The authors reported renal cell carcinoma, rectal/colon cancer, breast and lung cancer.  Other authors include squamous cell carcinoma, melanoma and chronic lymphocytic leukemia. 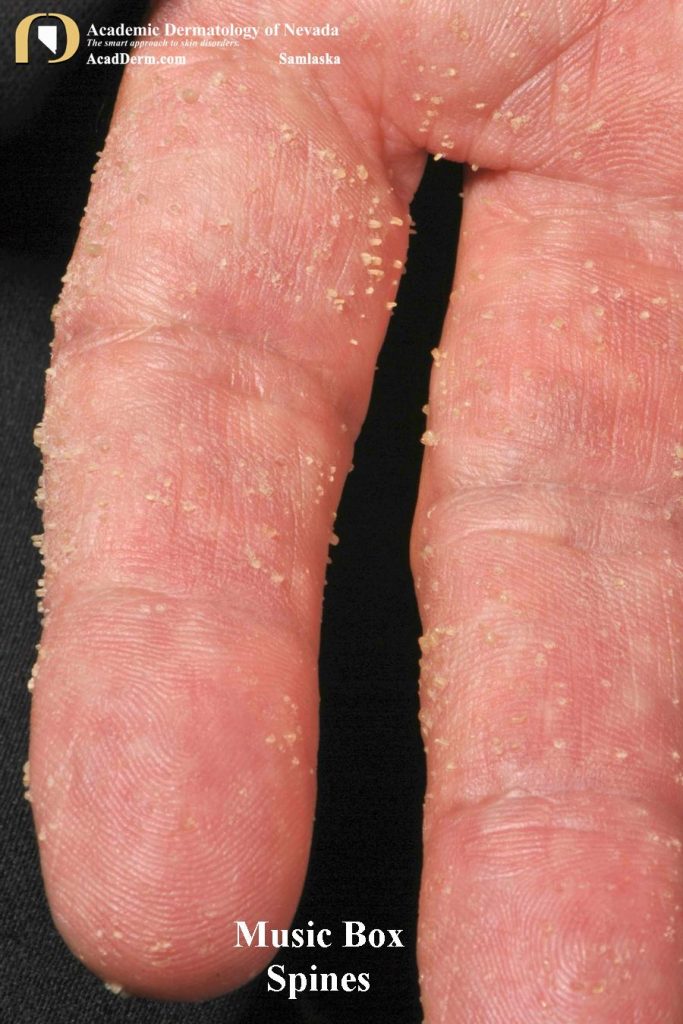 DIFFERENTIAL DIAGNOSIS:  The main disorder to exclude is arsenical keratosis.  There have been reports of multiple filiform verruca, but it is unlikely in cases that have numerous lesions, such as shown here.  Patients with Cowden’s syndrome can present with palmoplantar keratosis, but are easily differentiated based on facial lesions (trichilemommomas).  There are case reports of other associations, such as autosomal-dominant polycystic kidney disease with liver cysts, chronic renal failure, Darier’s disease, type IV hyperlipoproteinemia and pulmonary tuberculosis.

TREATMENT:  Our patient shaves his hands as other patients have (click HERE).  A number of other treatments have been reported with variable results to include topical emollients, keratolytics (salicylic acid and urea creams), mechanical debridement with dermabrasion and paring, tazarotene, 5-fluorouracil and 5-fluorouracil with topical tacalicitol.  A visit to see a dermatologist is highly recommended.  To read more about Music Box Spine Keratoses, also known as Music Box Spine Keratodema, click HERE and HERE.