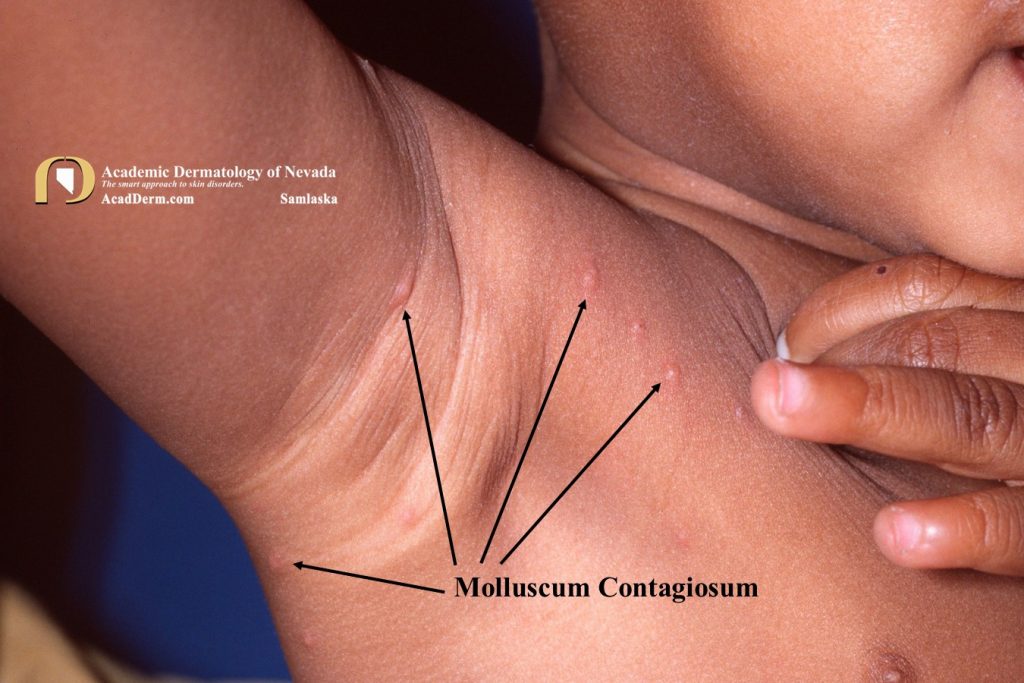 Molluscum Contagiosum (MC) is caused by four closely related poxvirus types, referred to as MCV-1 through MCV-4.  It is a worldwide infection that occurs mostly in children.  They have also been referred to as Water Warts.  There are two other classifications, 1) sexually transmitted form and 2) immunocompromised patients, most commonly HIV patients.  In children the MCV-1 is the most common type.  The appearance in all types is similar, except in the immunocompromised patient, where the lesions may take on an atypical form and may be much larger.  Individual lesions are smooth, firm, dome-shaped, pearly papules averaging 3-5 mm in diameter and often will demonstrate a central umbilication (see below). In children the distribution pattern is usually generalized and the lesions number from a few to over 100.  Frequent sites of involvement include the face, trunk and extremities.  Genital lesions occur in about 10% of children, however, when found restricted to the genital area one must consider the possibility of sexual abuse.  Children with other skin conditions, such as eczema or atopic dermatitis, are four times more likely to have over 50 lesions. In HIV and other immunocompromised patients, such as sarcoidosis, solitary or multiple lesions may be present for many years, and I have removed lesions in these patients that had no features suggestive of MC, as shown in the image above, which I removed from an HIV patient.

HISTOLOGY:  MC has a very unique pathology under the microscope.  The intracellular viral particles are very large and can be seen on light microscopy.  Numerous small, eosinophilic and later basophilic inclusion bodies are observed and are referred to as molluscum bodies or Henderson-Paterson bodies.

DIFFERENTIAL DIAGNOSIS:  Rarely is this a difficult diagnosis to make, since the clinical lesions are so characteristic.  However, some authors have reported a differential diagnosis to include:  verruca vulgaris, chickenpox, folliculitis, syringomas, steatocystoma multiplex, basal cell carcinoma, acne vulgaris, Gianotti-Crosti syndrome, milia, sebaceous hyperplasia and papular urticaria. TREATMENT:  The form of treatment is based on the clinical setting and the age of the patient.  In children there is some controversy about having to treat these patients, since it is a self-limited infection with no long term complications.  Likewise, there is no gold standard of treatment, and many destructive forms of treatment are reported.  My take on MC is that I always treat, since many children may have lesions for many months and there is always the risk of transmitting to others.   I treat my patients every 2 weeks until the lesions have resolved.  Once immunity occurs it is not uncommon for all the remaining lesions to suddenly go away.

My favorite treatment for children is Cantharidin with Salicylic Acid, a product known as Canthacur.  Cantharidin is derived from the South African blister beetle (Cantharis vesicatoria), which has been used in ancient Chinese medicine to treat many maladies.  It was initially used in the U.S. in the 1950s but was removed from the market by the FDA in 1962 due to manufacturing regulations.  I have to purchase my supply through Canada.  Cantharidin is placed topically and induces an intraepidermal blister (does not scar) that is relatively painless and delayed (takes 4-12 hours).  Patient response may range from minimal blistering to marked blistering, as shown in my patient above.  Although this looks dramatic, most patients do not have symptoms of pain, although itching may occur and the actual blistering can scare some children.  Most kids do very well with it…and get a kick out of being treated with beetle juice.  I do not use liquid nitrogen treatment in children under 11.

For adults the most common treatment is cryotherapy every two weeks until resolved.  There are a variety of other treatment options, mechanical destruction methods, chemical and immunomoduatory treatments that are beyond the scope of this blog.  To read more about MC go HERE, HERE and HERE.