In 1916, the dermatologist Richard Lightburn Sutton described two young women with pigmentary changes he called “leukoderma acquisitum centrifugum,” better known as Sutton nevus or halo nevus. He thought that the cases he presented were varieties of vitiligo, not nevi. The correlation of leukoderma acquisitum centrifugum with melanocytic nevus was made by John H. Stokes, as reported by the editors of the 1923 Year Book.  Halo Nevi are characterized by a pigmented mole with a surrounding depigmented zone.  They are often solitary but at times may be multiple and occur most frequently on the trunk and mostly in teenagers.  They are very common and some have estimated a prevalence in white populations as high as 1%. 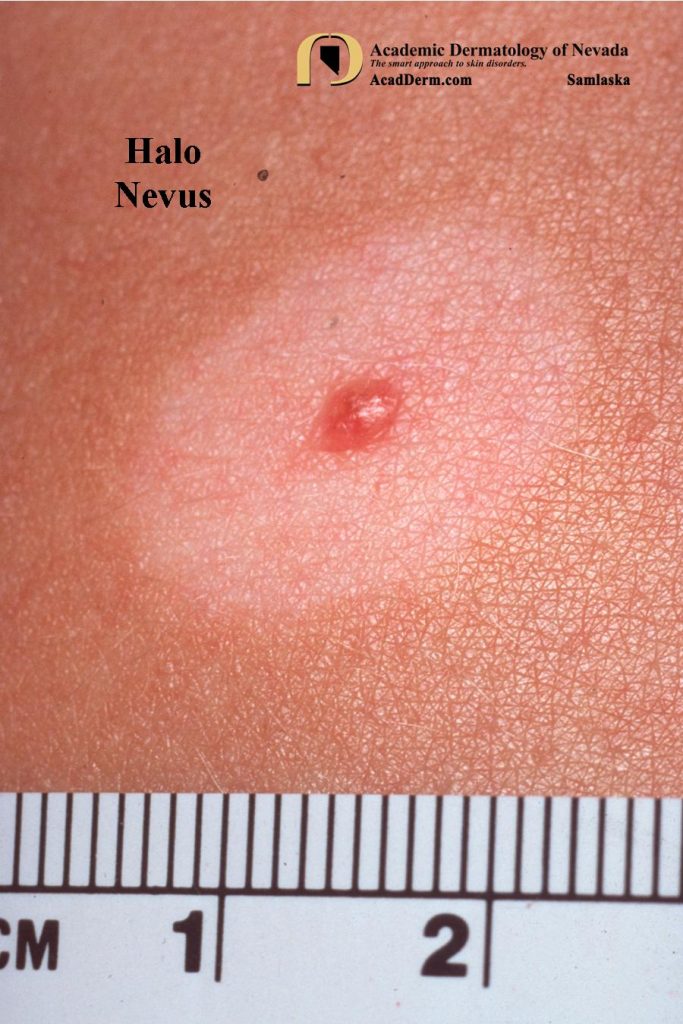 The central nevus, or mole, loses its pigmentation turns pink and subsequently disappears, leaving a round to oval area of depigmentation that gradually repigments…and the mole magically is gone leaving not trace…and no scarring.

It is considered an autoimmune disease and may be associated with vitiligo. On biopsy there is an infiltrate consisting of many cytotoxic T cells (CD8+).  In adults, at times melanoma may also induce an immunologic response producing a halo in nevi at a distant site, so it is advised to do a good skin exam to identify a possible associated melanoma in older patients…but in all my years of practice I have yet to find one.  If the central nevus within the halo appears atypical, a biopsy may be warranted for this reason.  No treatment is usually required.  Again, this Blog Post is not designed to replace a clinic visit.  If you currently have what you think is a Halo Nevus I strongly advise you to have a dermatologist take a look and possibly perform a generalized skin exam.  To read more about Halo Nevi click the link HERE and HERE.