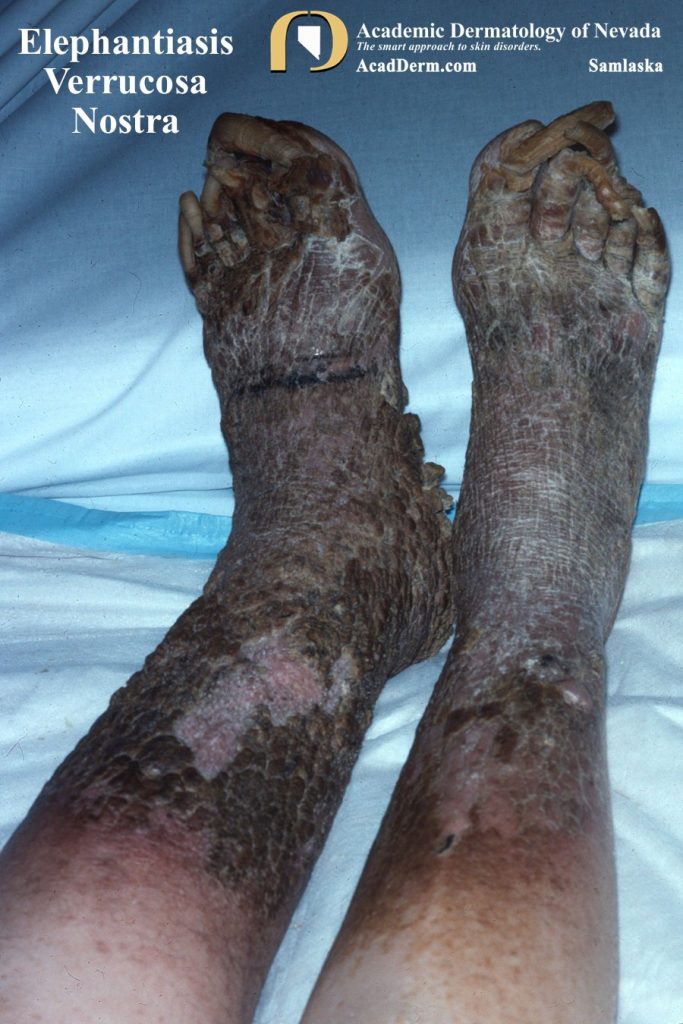 In 1933, Sir Aldo Castellani presented a paper suggesting using the term Elephantiasis Verrucosa Nostra (EVN) to indicate nonfiliarial forms of elephantiasis.  He suggested that the term should be used in a “very relaxed way” to denote all kinds of conditions of different etiology including elephantoid conditions due to climatic bubo, syphilis, tuberculosis and tumors.  In his time elephantiasis was associated with filiarial infections, mostly out of Africa, associated with Wuchereria bancrofti.  He described autochthonous cases from England that could not have been of filiarial origin and used the term “nostras” meaning “from our region.”  He also referred to EVN as “mossy foot.” Elephantiasis is associated with chronic lymphedema.  Primary lymphedema can be caused by congenital agenesis, hypoplasia, or obstruction of lymphatic vessels.  Secondary lymphedema results from a disruption or obstruction of normal lymphatic vessels and the most common cause worldwide is filariasis.  In modern, more western countries lymphedema may be associated with repeated streptococcal lymphangitis, erysipelas, malignancy, trauma, prior surgery, radiation therapy, chronic venous stasis, scleroderma and obesity.

Very little has been written about EVN.  In my experience this condition is associated with the indigent and chronically obese indigent, as the case I show here demonstrates.  The patient was admitted to the hospital for EVN and he lived on the street with no prior medical care.  He was not obese.  The dramatic onychogryphosis, the massively overgrown nails, adds credence to his indigent nature.  The diagnosis of EVN is usually made based on history and physical examination.

TREATMENT:  There is no standard of care for EVN.  Obviously, exclusion of infection and other possible underlying causes need to be excluded.  Initial therapy is directed at relieving the edema such as compression stockings, wraps or lymphatic pumps.  Physical therapy is important, particularly for indigent patients, and basic skin hygiene should be provided.  Surgical debridement has been reported to help reduce the verrucous lesions in a few case reports.  Keratolytics (eg, salicylic acid or lactic acid lotions) may be helpful.  Surprisingly, liposuction as well as free muscle flap transfers have been used successfully in some patients.  Limb amputation may be required in refractory cases, particularly if lymphangitis occurs or the patient becomes septic.  To read further about EVN click HERE, HERE and HERE.