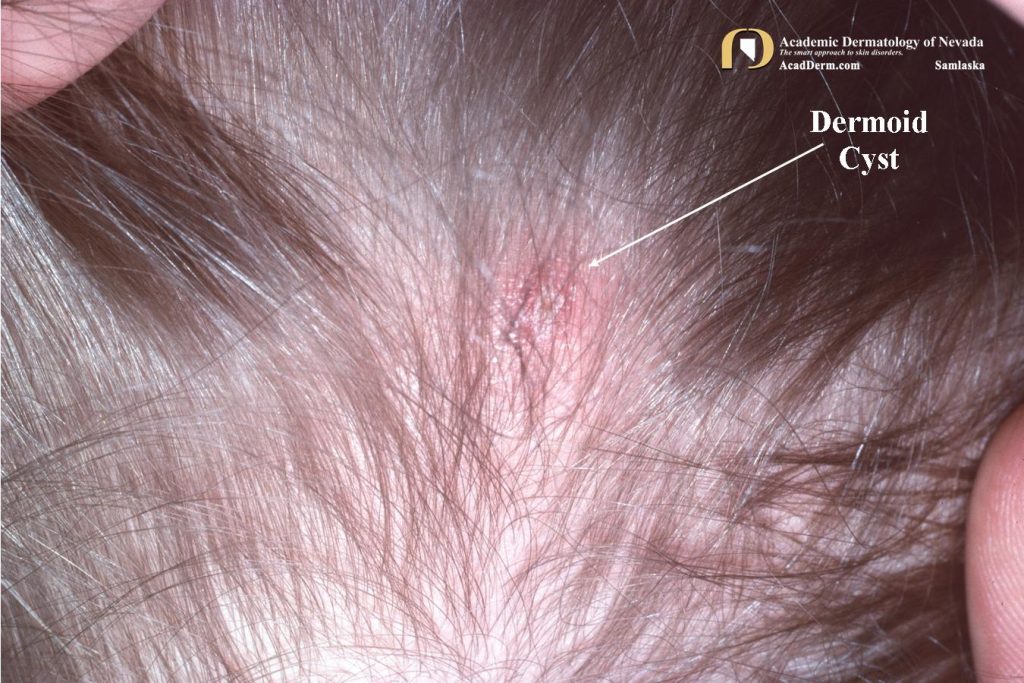 STORYTIME:  I was in my office at Tripler Army Medical Center when Tony Bottini, a Neurosurgeon (now practicing in St. Paul, Minnesota, here is his LINK), came to visit.  He poked his head in the room and asked me if I would take a look at a child that the Family Practice doctors wanted to surgically remove a cyst on the scalp.  He was worried that it was possibly a Dermoid Cyst that would require a lot more than a simple excision.  Naturally, I said sure.  On examining the child there was a slightly erythematous scaling plaque (shown above) along the midline occipital region overlying a palpable mass that was approximately one centimeter in diameter.  What was very concerning was that there appeared to be a ridge of bone tenting around this mass on palpation.  I agreed with Tony.  We asked for a CT scan to be performed. 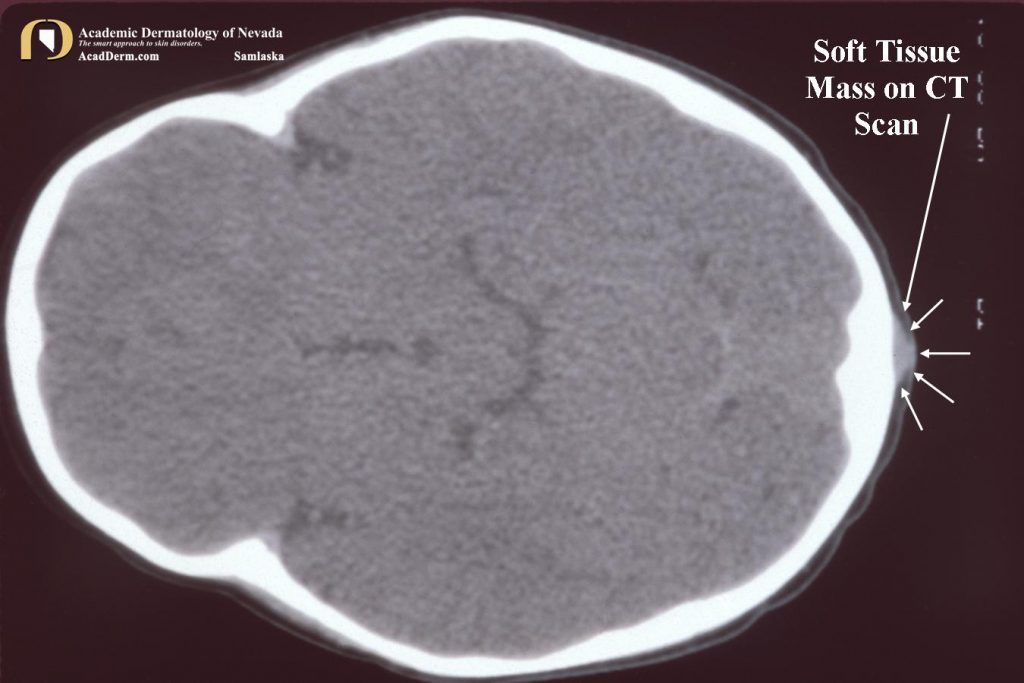 The scan showed a soft tissue mass in the subcutaneous tissue of the scalp, but no evidence of a Dermoid Cyst.  Bone shows up white on CT scans.  Tony and I believed the scan was inadequate and we insisted on obtaining an MRI scan.  MRI scans were new at the time and it took some convincing to get the Radiology Department to agree to it…based on the negative CT scan.  However, based on our clinical examination we were insistent.  Being in a military tertiary care hospital was fabulous for patient care.  As military physicians we all knew each other and worked very closely together.  I had no problem walking into the head of a department and asking for help on any case I was concerned about…as so in this case.  Tony was the real steward here…he firmly believed we were in the right. 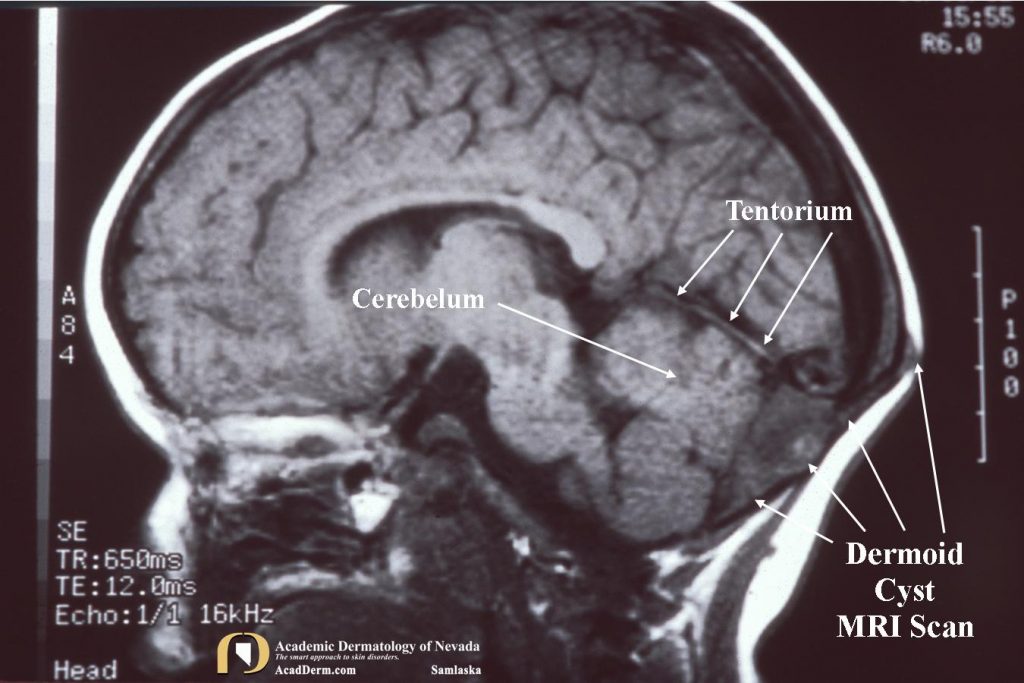 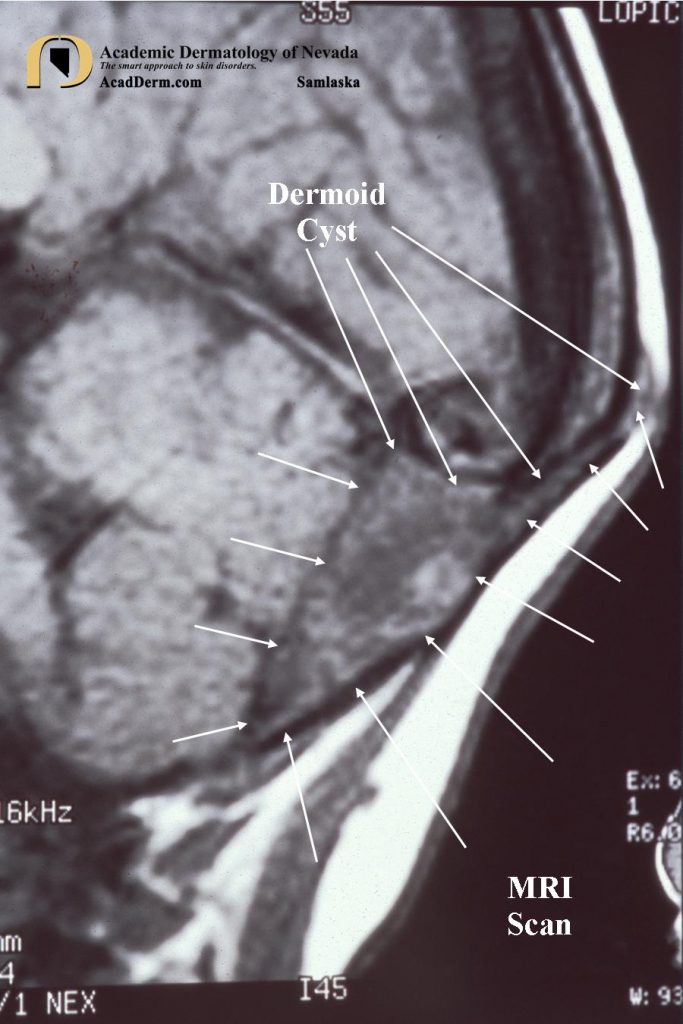 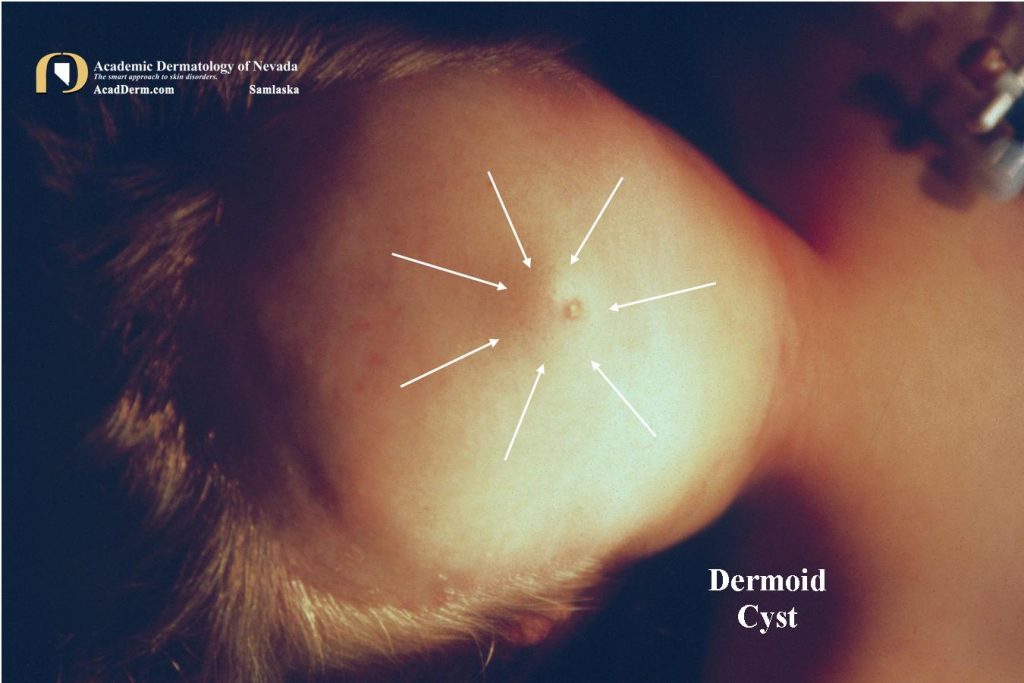 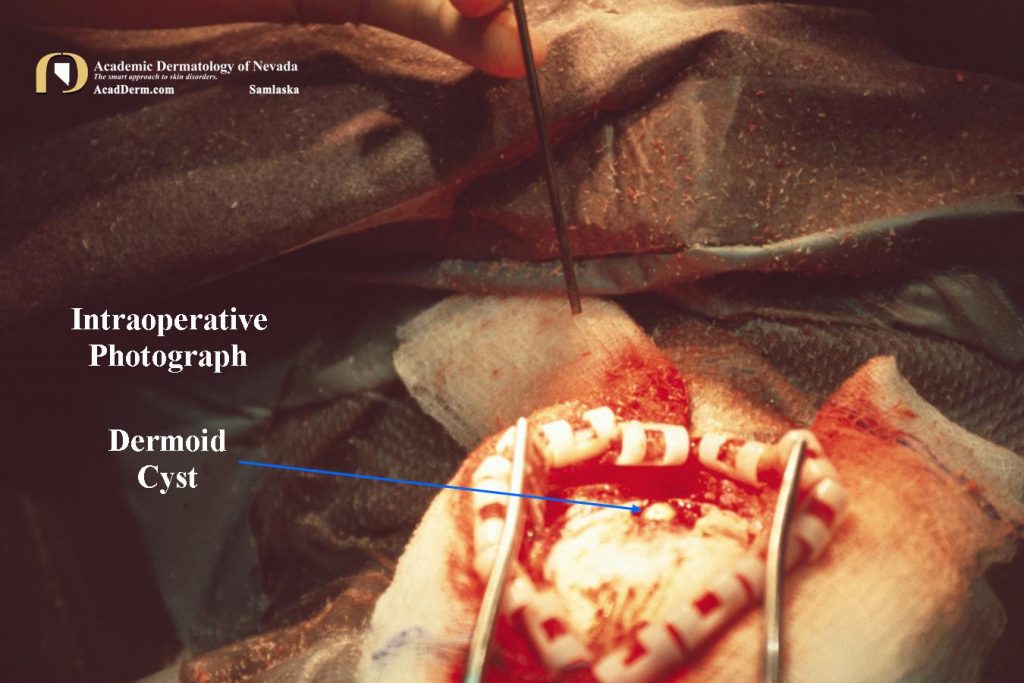 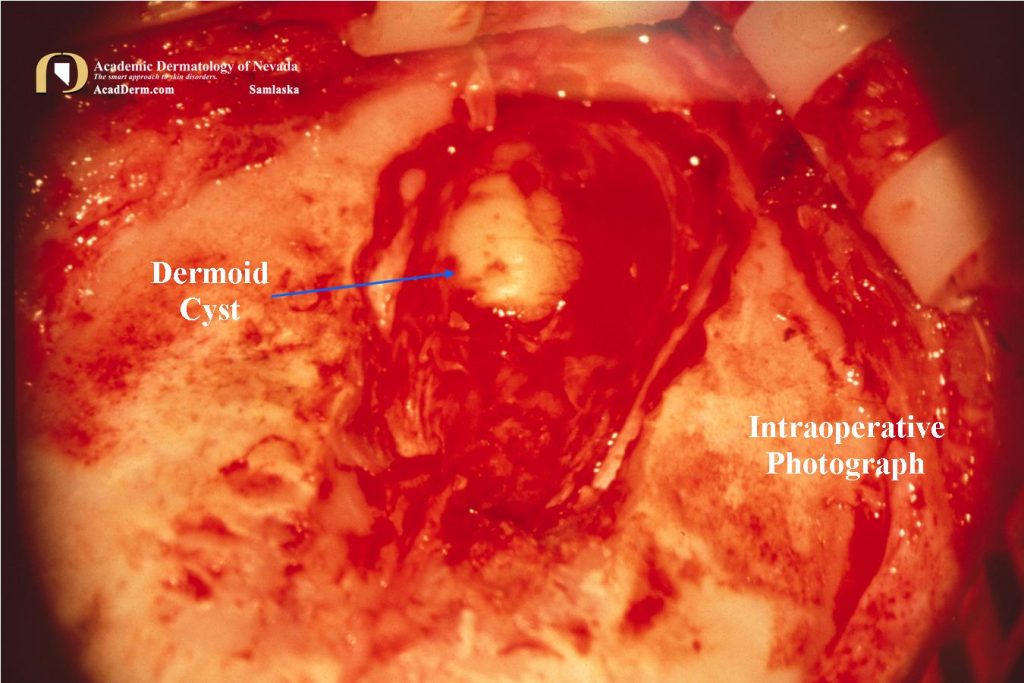 These are intraoperative photographs that Tony took.  You can see the bulging mass that communicated with the brain…this is a Dermoid Cyst.

What is a Dermoid Cyst?  Dermoid Cysts are considered embryological defects forming teratomas along closure zones…such as the sutures along bony plates (to see images click HERE)…where the plates of bone connect.  On the face the most common locations are:

It has been estimated that about 50% of these tumors found in the head region involve suture lines adjacent to the orbital rim. 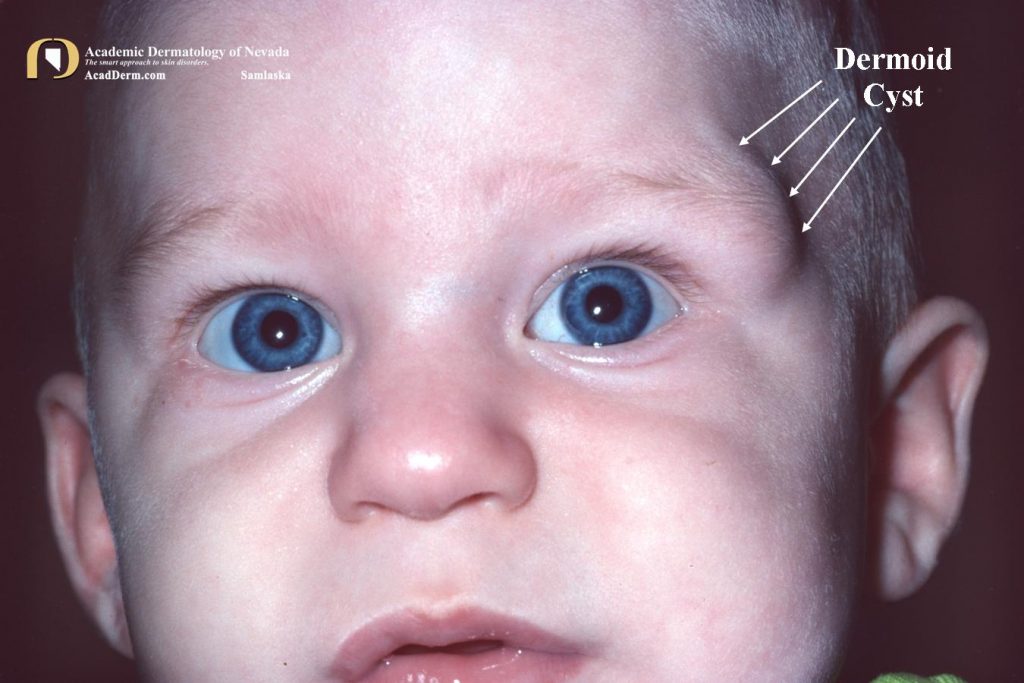 Dermoid cysts may also be found on the chest, back, abdomen and perianal area.  Because they are embryological defects they often connect to underlying structures such as the pleura and central nervous system (CNS).  It is extremely important not to miss these, because casual attempts at simple excision can results in serious complications such as CNS infection and death.  They must be removed by a Neurosurgeon if found along the cranium or spinal regions.  To read more about Dermoid Cysts click HERE and HERE.