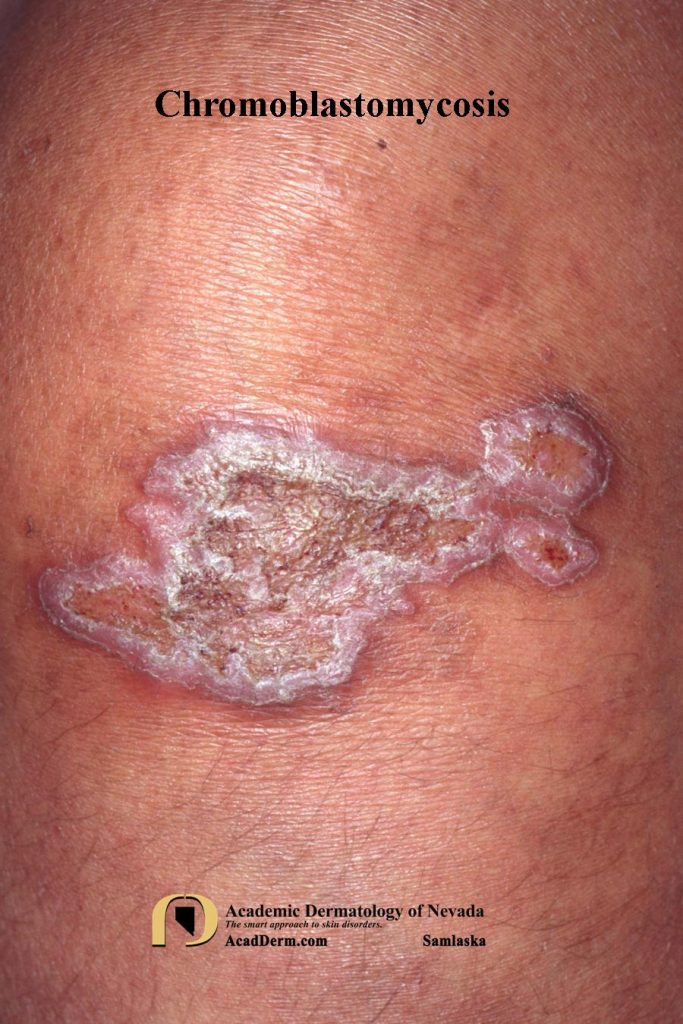 The disease was first reported by Maximilliano Willebald Rudolph in 1914 in a German journal…the article was titled “About the Brazilian fig tree.”  It was first recognized in Brazil by Pedroso in 1911.  Chromoblastomycosis (CBM) is also known as Chromomycosis and most commonly affects the lower extremities.  It occurs as a result of direct inoculation of fungal organisms into the skin.  It usually starts as a small, pink, scaly papule or warty growth on the foot, lower leg or knee and then slowly spreads through direct extension and sometimes develops satellite lesions.  Regional adenopathy may result from secondary bacterial infections.  Rarely, CNS involvement has been reported. 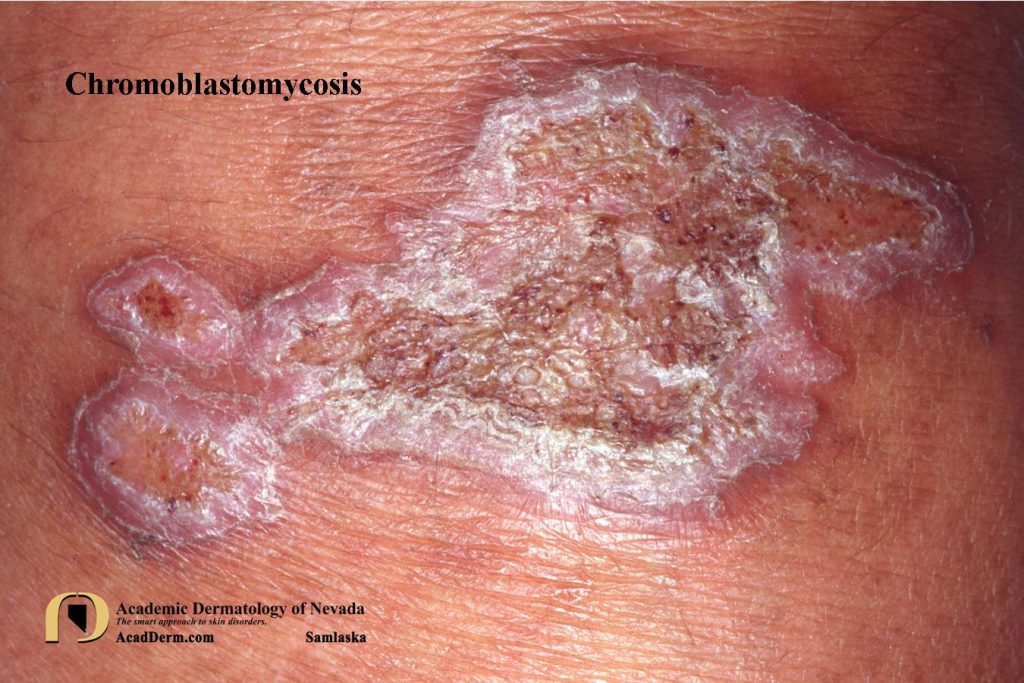 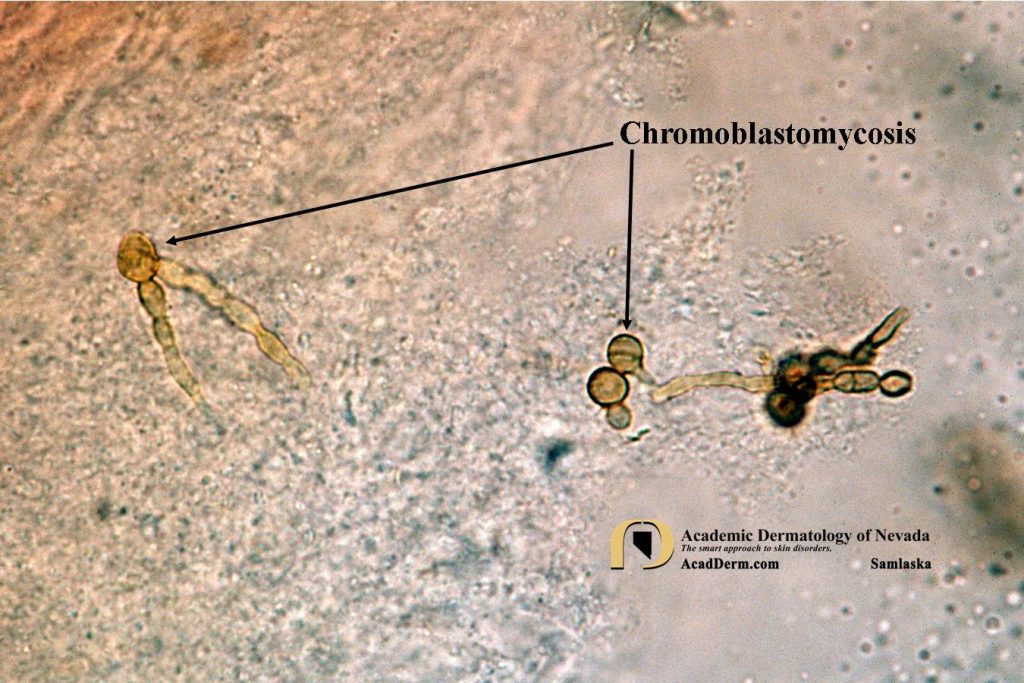 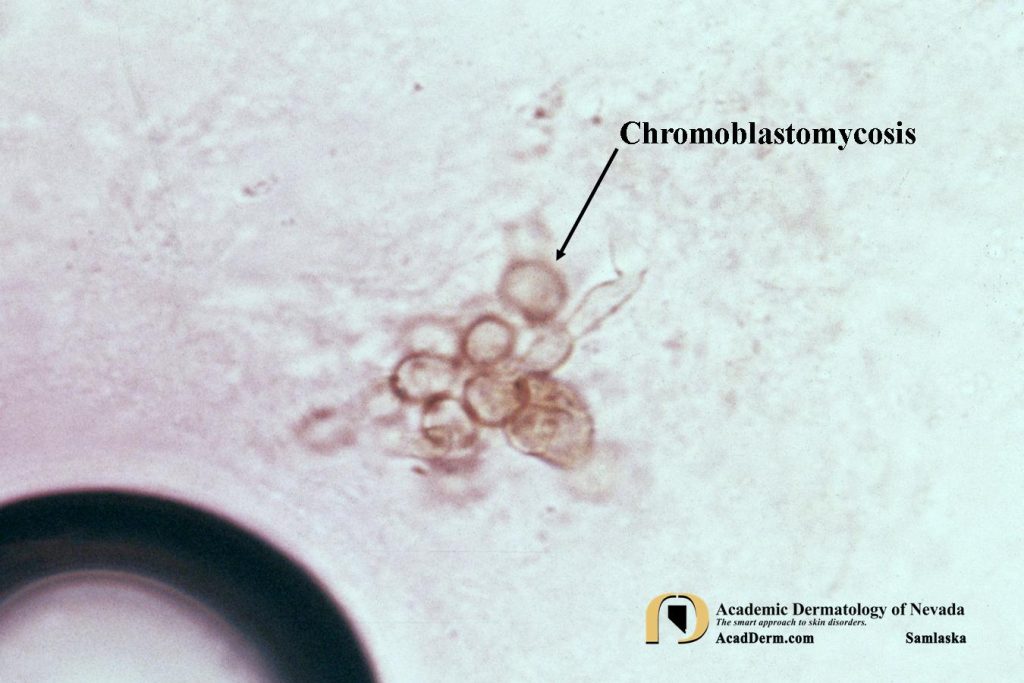 There is a 4:1 male predominance and farmers account for almost 75% of patients with CBM.  The disease is slowly progressive and the average time between the appearance of lesions and diagnosis is almost 15 years.  In long standing lesions squamous cell carcinomas may develop.

ETIOLOGY:  It occurs most commonly in more tropical and subtropical areas, particularly in South America where it was first described.  The fungi involved are found in soil, wood and decaying plant material.  The most common organisms are Phialophora verrucosa, Fonsecaea pedrosi, Fonsecaea compacta, Cladosporium carrionii, and Rhinocladiella aquaspersa.  Patients may have more than one organism and patients with CBM and paracocccidioidommycosis have been reported.

HISTOPATHOLOGY:  Lesions show pseudoepitheliommatous hyperplasia with intraepidermal abscess, dermal granulomatous reaction and the presence of pigmented sclerotic bodies.  The organisms appear in clusters that reproduce by equatorial septation, rather than by budding called Medlar bodies.

TREATMENT:  It often affects those who can not afford medications.  In some series only 30% of patients were cured with treatment although over 60% improved.  About 10% fail therapy and recurrence is not uncommon.  Smaller lesions are best treated with surgical excision or cryotherapy.  In cases that are extensive, chronic or burrowing, itraconazole 200-400 mg/day is given for 6-12 months.  Terbinafine 200-400 mg/day alone or in common with itraconazole 200-400 mg/day has also been reported effective.  Posaconazole 800 mg/day may also work.  Alternative treatments include cryotherapy, carbon dioxide lasers, PDT and local hyperthermia.  Resistant patients can be treated with amphotericin B and itraconazole  or limb infusion with melphalan and actinomycin D.  To read more about CBM click HERE, HERE and HERE.